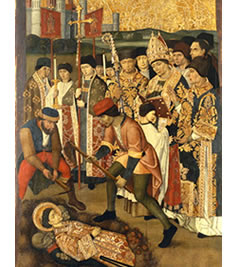 Victim of the envy of Hellenistic Jews, was condemned and stoned by the sanhedrin. The book of the Facts of the Apostles puts in his mouth an apologetic speech very important to understand the missional evolution of rising Christianity. Its celebration is celebrated on December 26, holiday in the Catalan Countries, as in other places in Europe, as the second day of Christmas. In addition, the discovery of the remains of the saint is commemorated on August 3, with the party of the Invention of the body of St. Stephen. He is the patron saint of many Catalan populations, as well as the brotherhood of the Barcelona frenzy. Invoked and liberator of Galceran de Pinós from the Saracens of Almeria. On the occasion of this event, he was elected patron saint of the parochial churches of the villages of Bagà, Berguedà and Vila-seca, in the Camp de Tarragona, and both villages celebrate the Feast Day on August 3.