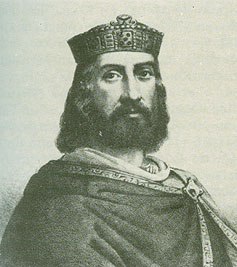 Born in 1113 and died in 1162. He accessed the throne in 1131 at the death of his father. The son of Ramon Berenguer III and his third wife, Dulce de Provenza, was eighteen years old when he inherited the Catalan counties. In 1148, Ramon Berenguer IV initiated war actions to expel Muslims from Lleida and Tortosa. The first objective was the Ebro, with a crusade, Genoese participation and papal authorization. The military operation combined the naval and terrestrial attack at the same time. The city was occupied, apparently, on December 31, 1148. The next objective, in 1149, would be Lleida. Thus, with the cooperation of Ermengol VI of Urgell, the forces of Ramon Berenguer IV settled down in Gardeny. Simultaneously Fraga and Mequinensa were attacked. Lleida and Fraga were occupied on October 24. And soon after Mequinensa fell. Until 1153, Ramon Berenguer devoted himself to ending all the Muslim rebels that remained in Catalan territory.

On the other hand, in 1151, the marriage between Ramon Berenguer and Peronella de Aragón was completed, when the queen was fourteen and Count thirty-seven. Seven children were born from their union: Pere (dead child), Ramon, Alfons (dead child), Pere, Sanç, Dolça and Elionor.