In 1147, Ramon Berenguer IV, count of Barcelona, sent an army to help Alfons of Castile, the Genoese and Pisans to conquer Almeria. Galceran de Pinós who was son and heir of the barons of Bagà was involved as an admiral of the Army. They did conquer the city, but Galceran and his companion, Santcerní, were taken prisoners and transferred to the prison of Granada. Galceran’s father asked Ramon Berenguer for help in order for him to know if his son was alive or dead and if they have asked for a rescue to release him. The Saracens reported that he was alive and that what they should do if they wanted to rescue him was obtain the following: one hundred thousand gold doubles, one hundred gold brocade rags, one hundred white horses, one hundred cows having the inner legs of a different color and one hundred maidens. The Pinós barons contributed with their heritage and managed to get the rescue except for the hundred maidens.

In an assembly with the vassals, they decided to give their daughters as follows: whoever has three will give two; whoever has two will give one; and those who have one will participate in a raffle. Once they had all the rescue collected, an entourage will be created to depart to Saracen lands from Salou’s harbor. Meanwhile, Galceran fervently prayed to Sant Esteve, patrón of Bagà, to release him from his captivity. And the day before the rescue would be embarked, Saint Stephen would release Galceran; it would also happen to Santcerní who is also released by the intercession of Saint Genís, patron of his parish. The rescue entourage and the two people released found each other miraculously in the Racó road (Vila-seca), very close to Salou’s harbor. With great joy they recognized themselves and they went together to Tarragona and from there to Barcelona to introduce themselves to Ramon Berenguer IV. Once they have rested, they returned to Bagà where they were received with immense joy. Galceran rewarded the maidens and families who had been delivered to them; he also donated to the Saint Stephen of Bagà church. Over the years, close to death, he retired as a monk at the monastery of Santes Creus where he died and was buried. 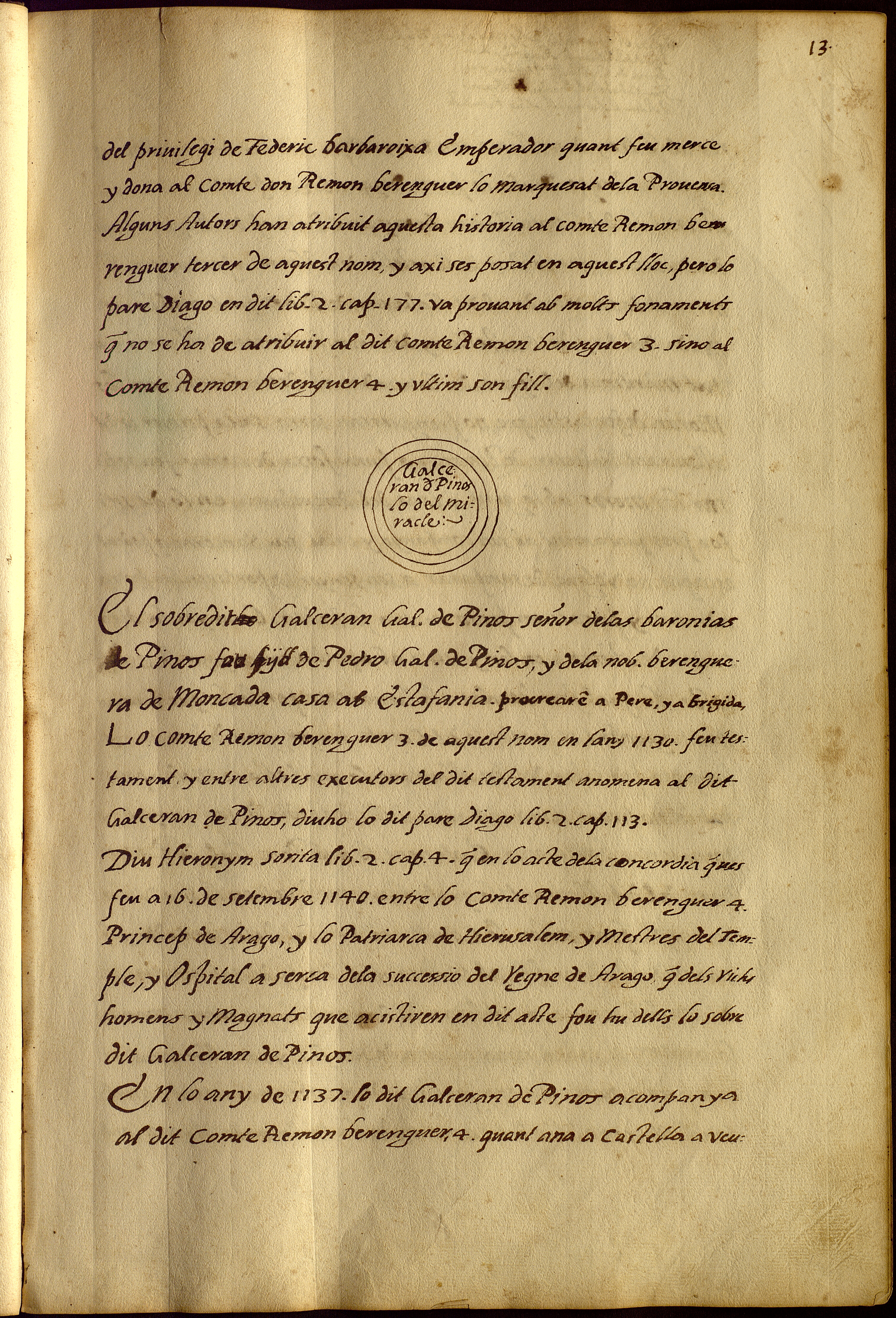 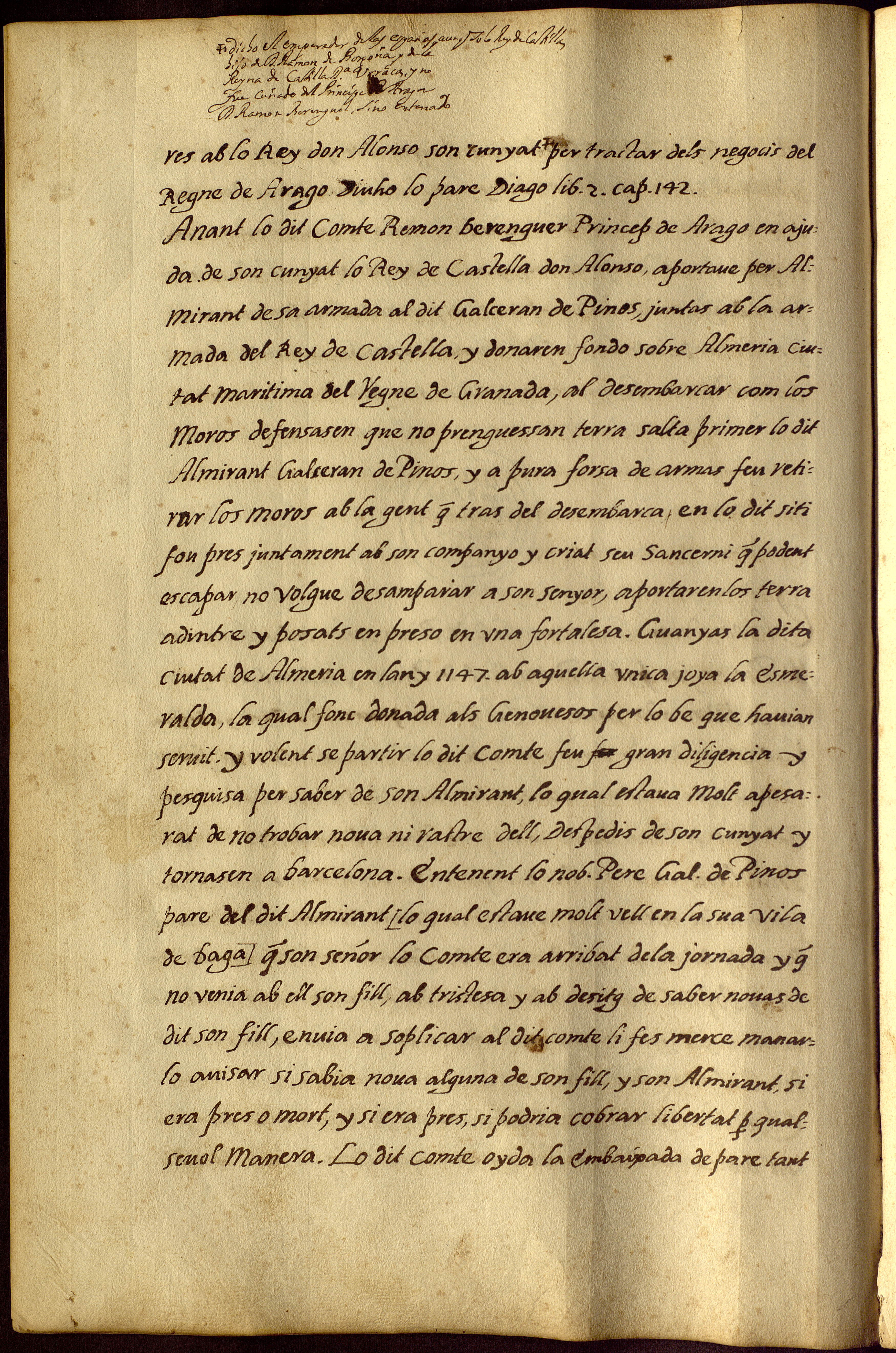 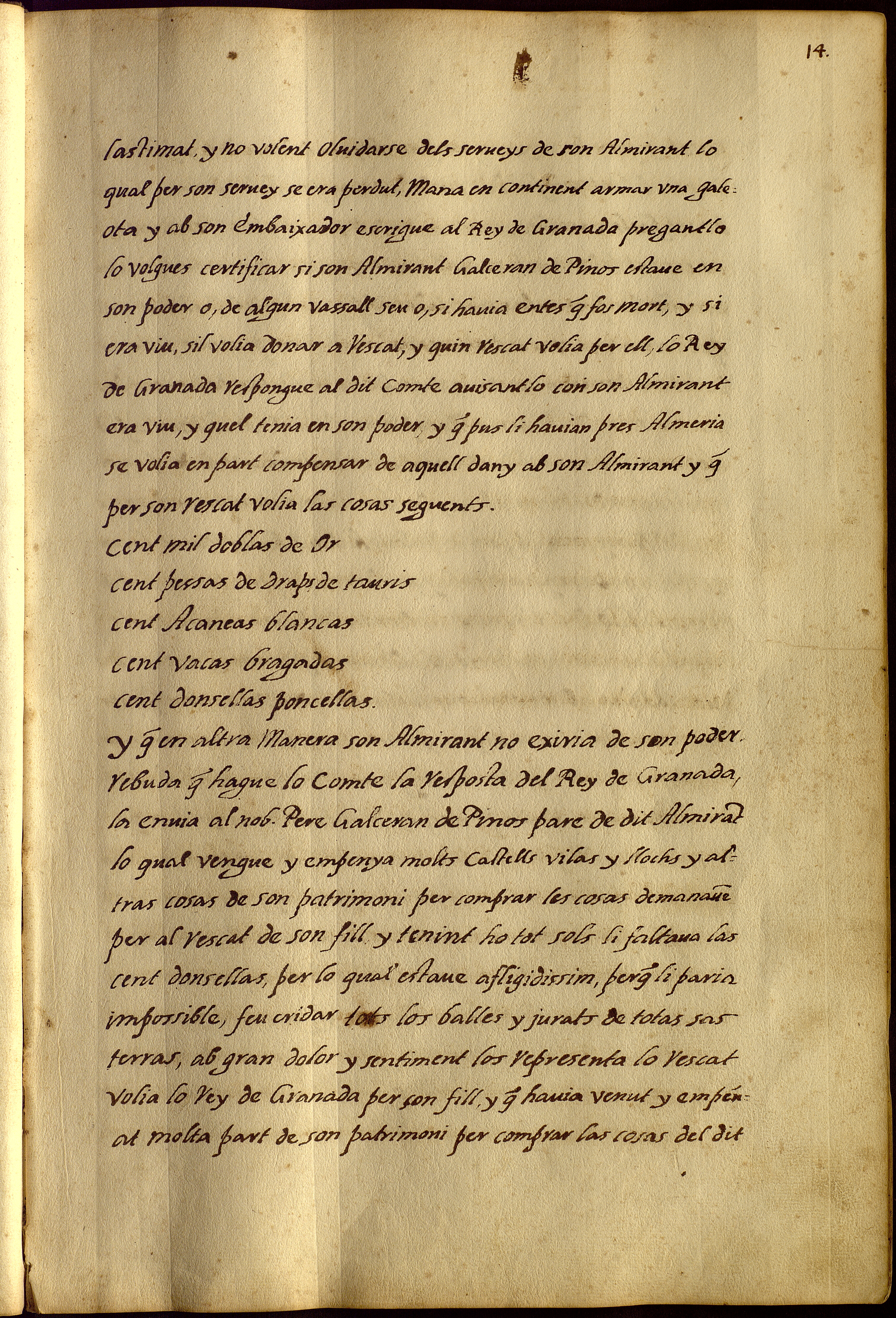 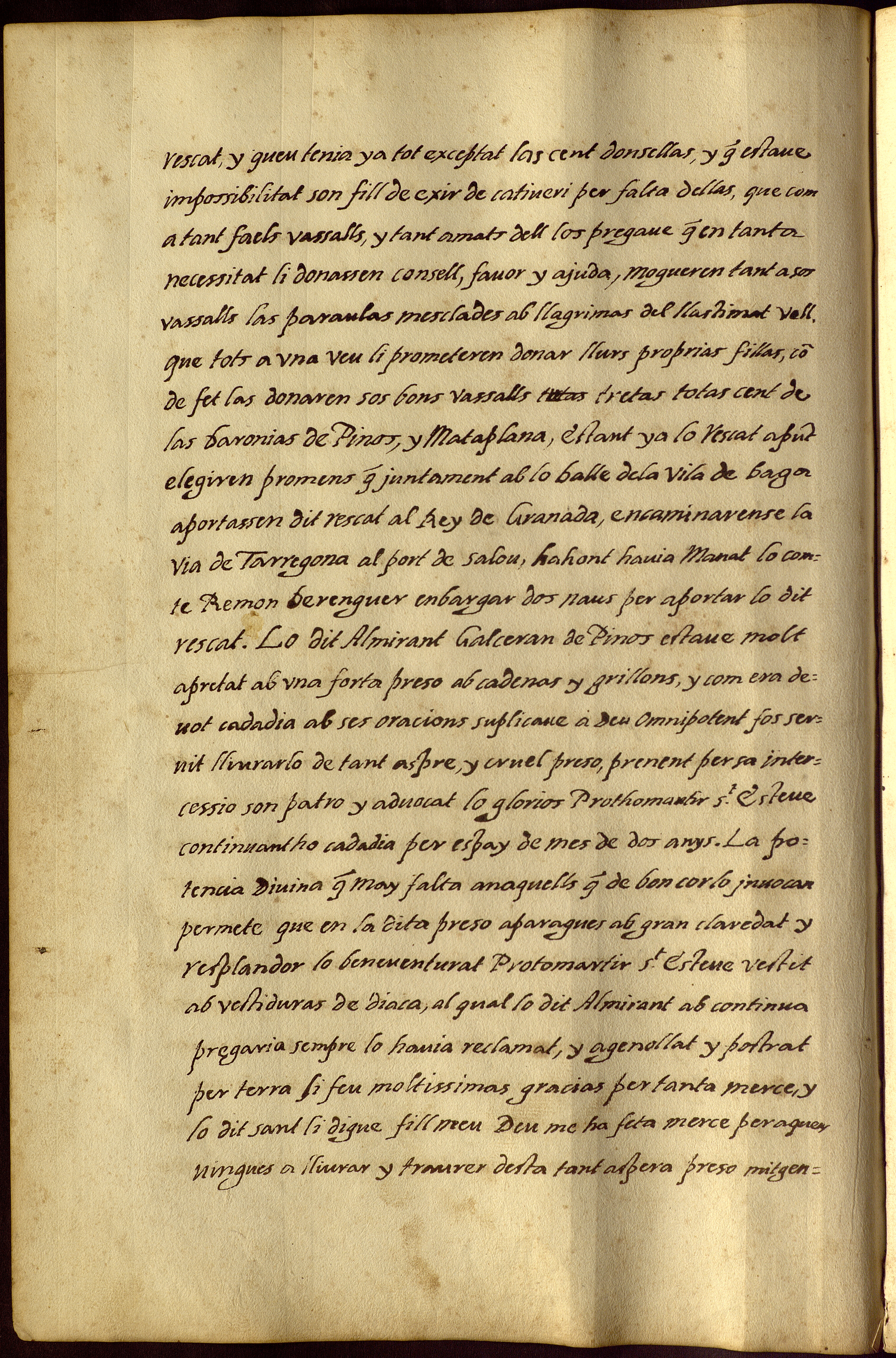 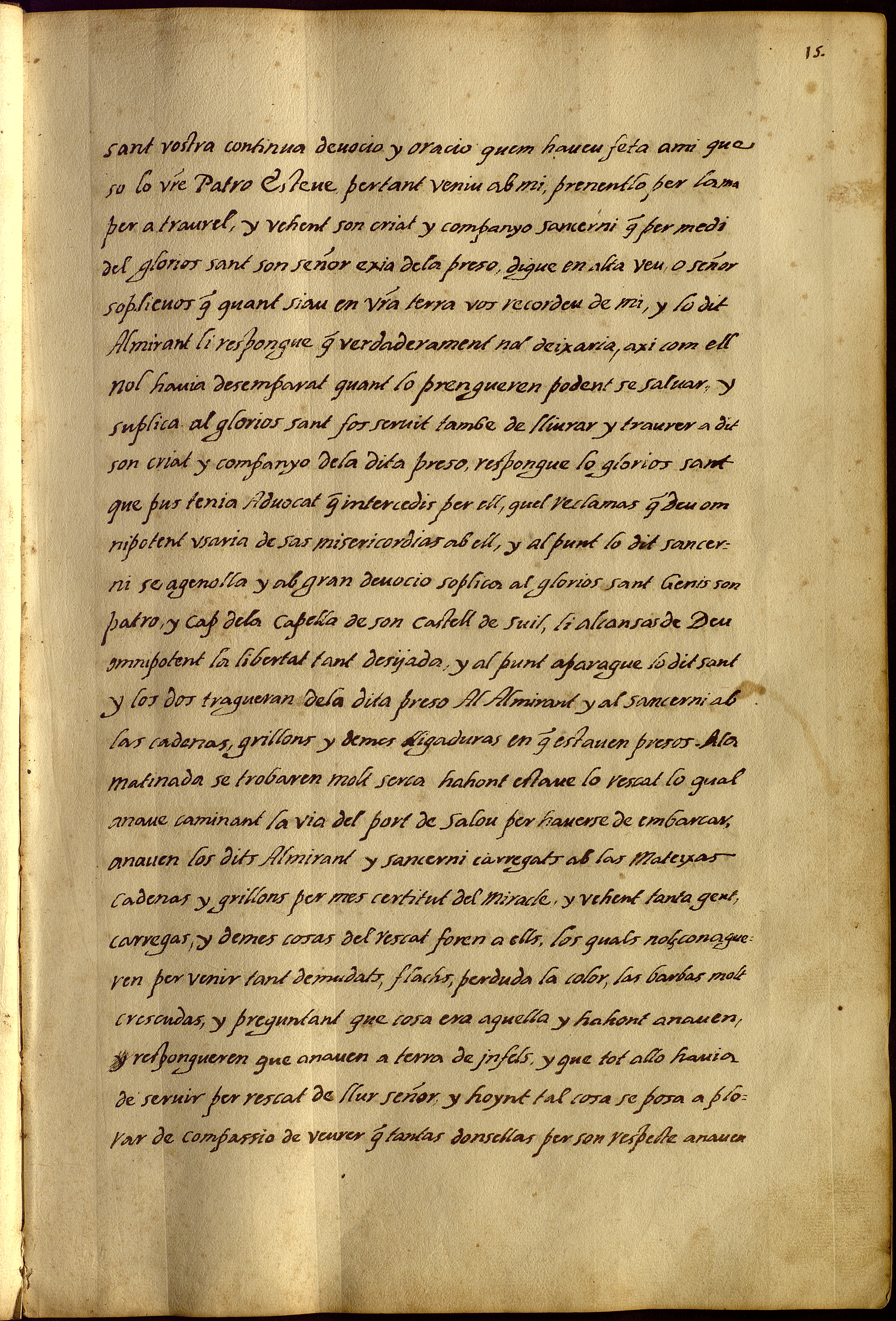 Illustrations of the legend written in the manuscript: Genealogy and the Descendants of those of the House and Family of Pinós. Directed to the Excellency, Isabel Margarita of Híjar and of Pinós, Duchess of Híjar and Countess of Belxit, written by Bernat Galceran de Pinós in 1620, and preserved in the AMSMB.