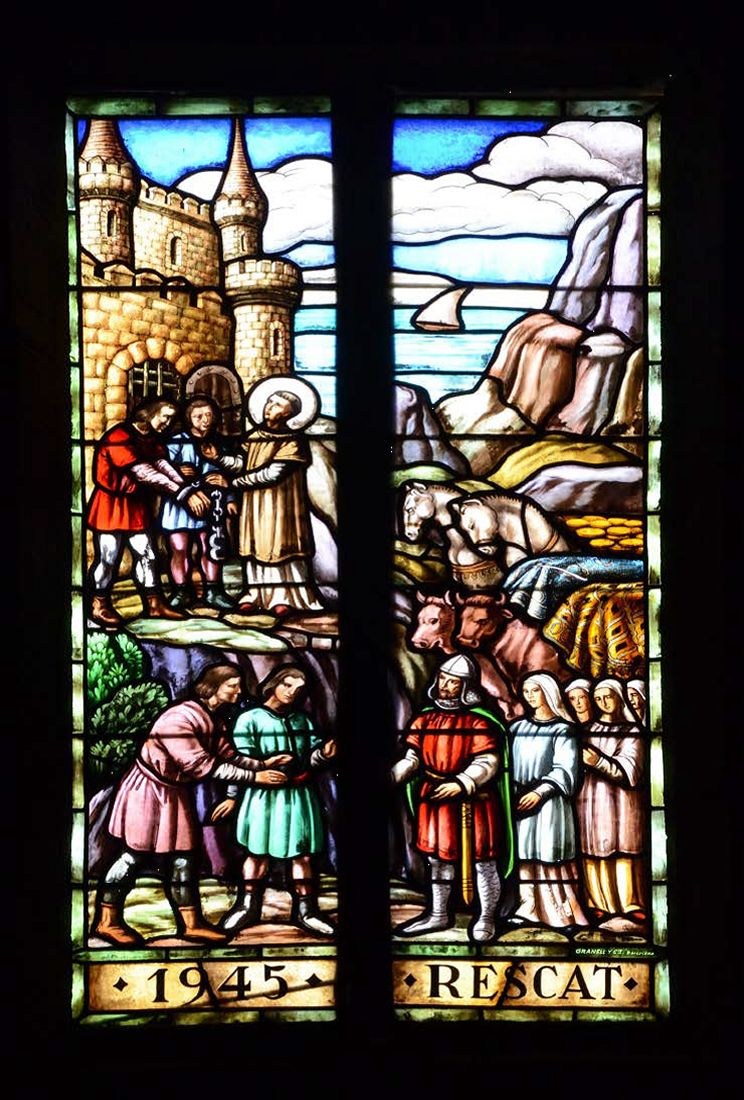 Stained glass window of Saint Stephen of Bagà’s church: represents the release of the captives and the encounter with the rescue entourage (2013) (Photo: Josep Ureña i Llitjos)

As decorative elements, in the Saint Stephen of Bagà’s church, we find a stained glass that represents the rescue of the hundred maidens, specifically the moment when the saint releases Galceran de Pinós from the Saracen prison. And in the magnificent space known as the arcaded square, Galceran de Pinós’ square, there is a bronze statue of the character that gives its name to the place, work of the sculptor Josep Maria Companyó made in 1966. As for Vila-seca, there has always been a great devotion to St. Stephen, the patron saint of the Parish, and the rescue’s legend has been very typical; All of this has inspired the construction of monuments, composition of joys, elaboration of altarpieces and the creation of a dance, St. Stephen’s dance. In past years, there is evidence of the existence of a simple monument, the Pylon of the Rescue, which recalled the place where the legend places the meeting of the rescue’s procession the with the released prisoners. The Pylon was pilgrimage place to invoke divine aid to calamities, especially drought. It is documented that a procession of thanksgiving and a mass to thank the abundant rain that benefited the fields was held in 1648. In the same document, the joys dedicated to Saint Stephen are also mentioned.

In 1936 this Pylon was destroyed. On August 29, 1965 another was inaugurated, consisting of a large block of soldering stone, which contained a beautiful relief in bronze, with the rescue scene of the sculptor Juan Salvadó Voltas, the shields of Vila-seca and the arms of the Pinós; on the other side there was the following inscription:

Walking, stop: here is where the noble Galceran de Pinós and his assistant Santcerní met, miraculously liberated by intercession of St. Stephen, with the hundred maidens and all the rescue that was demanded by the King of Granada

Recently, the Pylon has been relocated at the entrance of the Torre de Dolça Park, since in the previous situation it had been left in the lands near Port Aventura Park and less visible to those interested in visiting it. The inauguration started the events of the 2017 Summer Town’s Festivity  and authorities and entities from Bagà also attended.

The construction of the Saint Stephen’s church in Vila-seca began at the end of the 16th century, replacing the old one, probably built in the second half of the 12th century, dedicated to Saint Stephen. It had the greater altarpiece, from the Baroque period, with a central sculpture of the patron saint, and on the sides there were scenes from the life of St. Stephen and the Rescue. The altarpiece was burned in 1936. 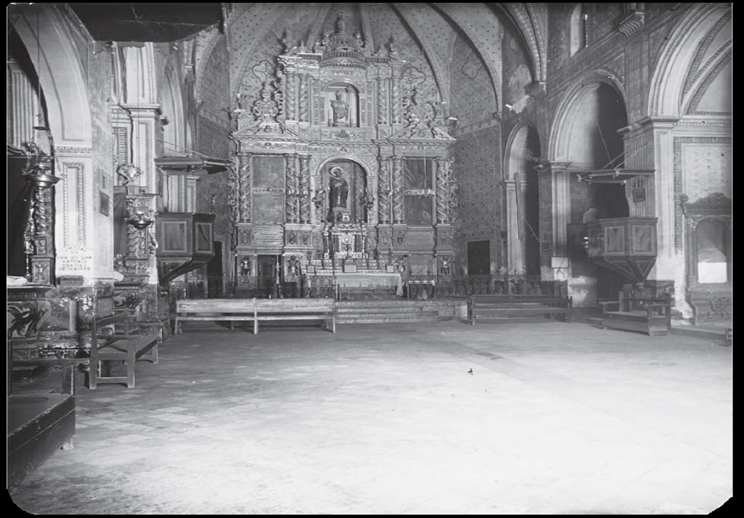 Altarpiece of the Saint Stephen’s church of Vila-seca with four fragments of the life of St. Stephen, including the miracle of liberation. The altarpiece was burned in 1936. Photo of 1923 (Source: National Library of Catalonia: Fons Salvany. Photo: Josep Salvany i Blanch)

Bronze statue of Galceran de Pinós located in the square of Bagà. It was made in 1966 by the sculptor Josep M. Companyó

The old Pylon of the Rescue, commemorating the place where prisoners were released with the rescue entourage in Vila-seca. It was destroyed in 1936 (Source: Municipal Archive of Vila-seca)

Relief of the Pylon of the Rescue of Saint Stephen in Vila-seca, carried out in 1965 by the sculptor Joan Salvadó Voltas (2018) from Vila-seca (Photo: Ramon Setó Vallverdú) 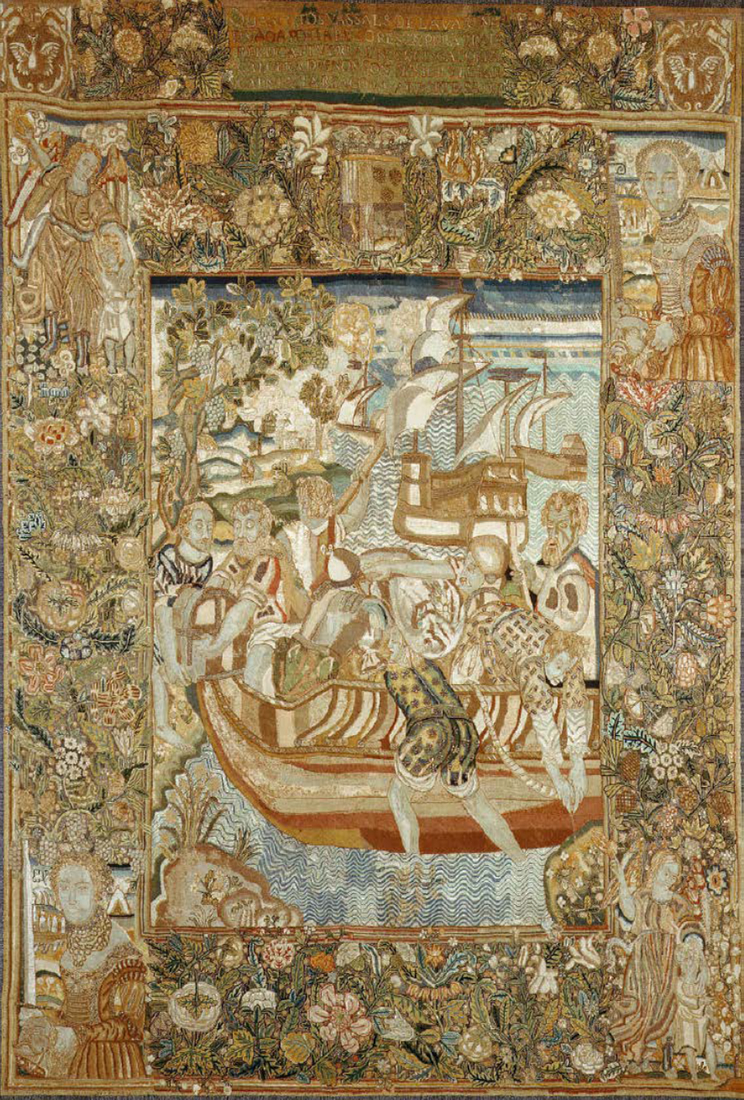 Embroidery with the representation of the vassals of the Barony of Bagà loading the goods to Salou’s port to satisfy the rescue of Galceran de Pinós. 16th-17th centuries (Photo: The Metropolitan Museum of Art) 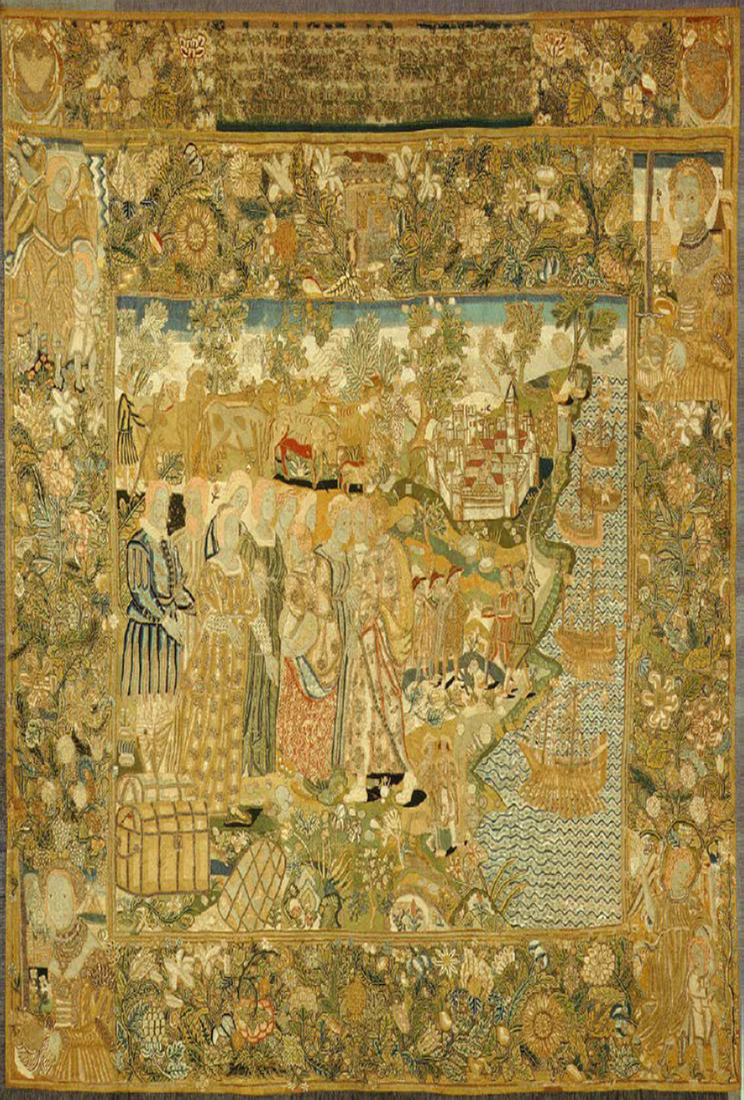 Embroidery with the representation of Galceran de Pinós in Tarragona’s port once rescued by St. Stephen. 16th-17th (Photo: The Metropolitan Museum of Art)

The embroidery of the Rescue

This is a unique collection, practically unknown in our country that was made at the end of the 16th century, based on technique, materials and decoration. Regarding the origin, the author opted for Barcelona and Saint Stephen was the patron. But other possibilities should not be ruled out, such as the Pedralbes monastery, since they had a close relationship with Pinós. But the fact that the inscriptions presented are most of them are in Catalan, there is no doubt that they were designed and executed in Catalonia.

For the same fact that Bagà and its inhabitants are recognized, it is thought that the task of executing these embroideries could come from the people of this town, on the occasion of the wedding of the Duke of Híjar with Francesca de Castre Pinós. This is what it is confirmed by the coat of arms that we find in all the embroidery:

There is also an ox, although in some shields it appears rampant, in others, we can assure that it comes from the lineage of the Borja. In the beginning, by their size and number, we know that they were conceived as murals, like tapestries, to decorate a palace. They measure approximately nine square meters, for that reason they are often called tapestries, but it must be borne in mind that the technique of tapestry and embroidery are two distinct techniques.

Unfortunately, there aren’t any left in our country. Currently, of the eleven embroideries that we believe they formed the series, we have only three of them located. Two are in the reserves of the Metropolitan Museum of Art in New York and the third in a collection in Chile. The rest, probably dispersed in Europe or perhaps even in the United States.

CARBONELL, Sílvia.
A series of murals embroideries that narrate the legend of the rescue of the hundred maidens.
A: Bagadarun: miscellany, v.3 (July, 2000), p.97-120 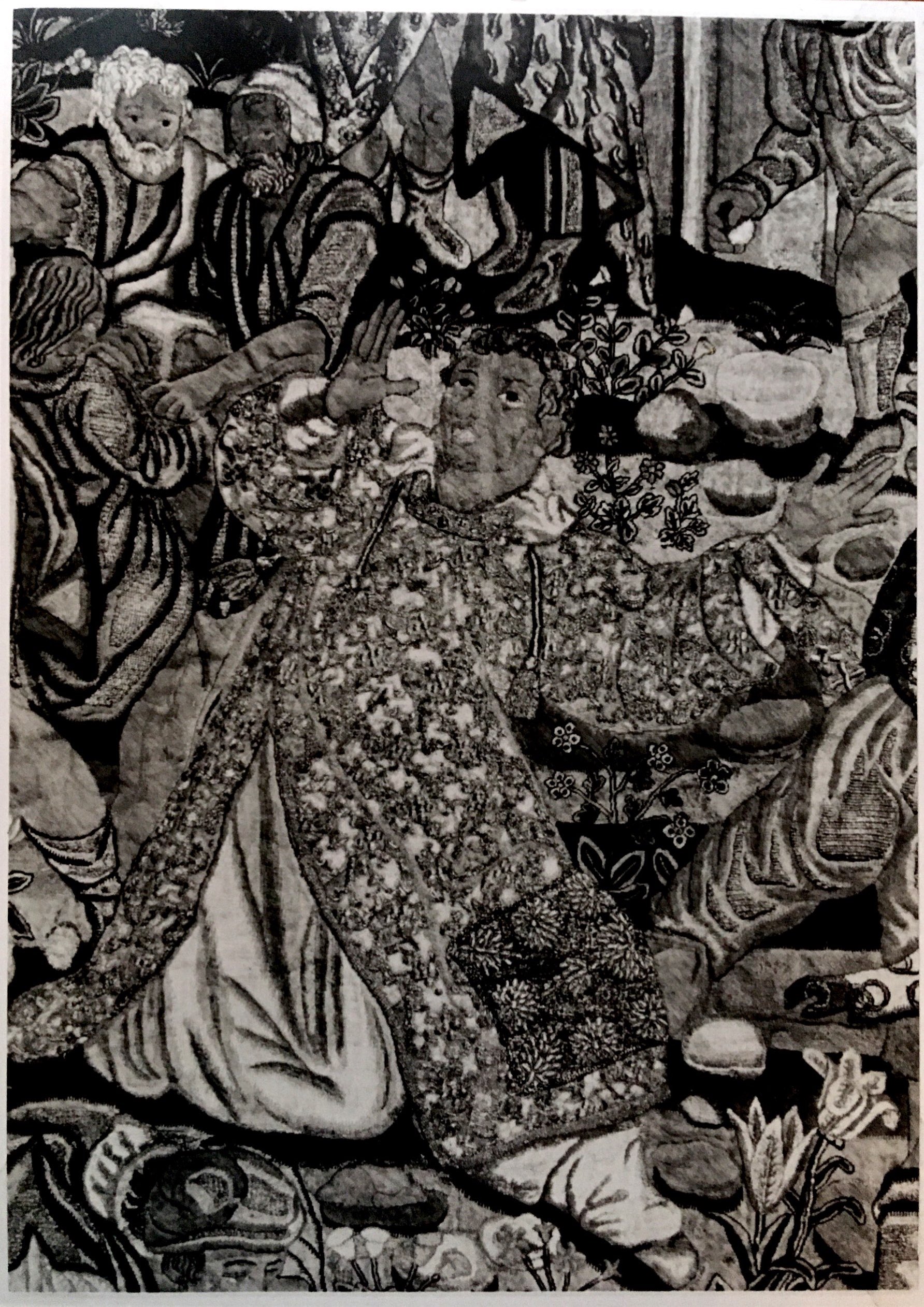 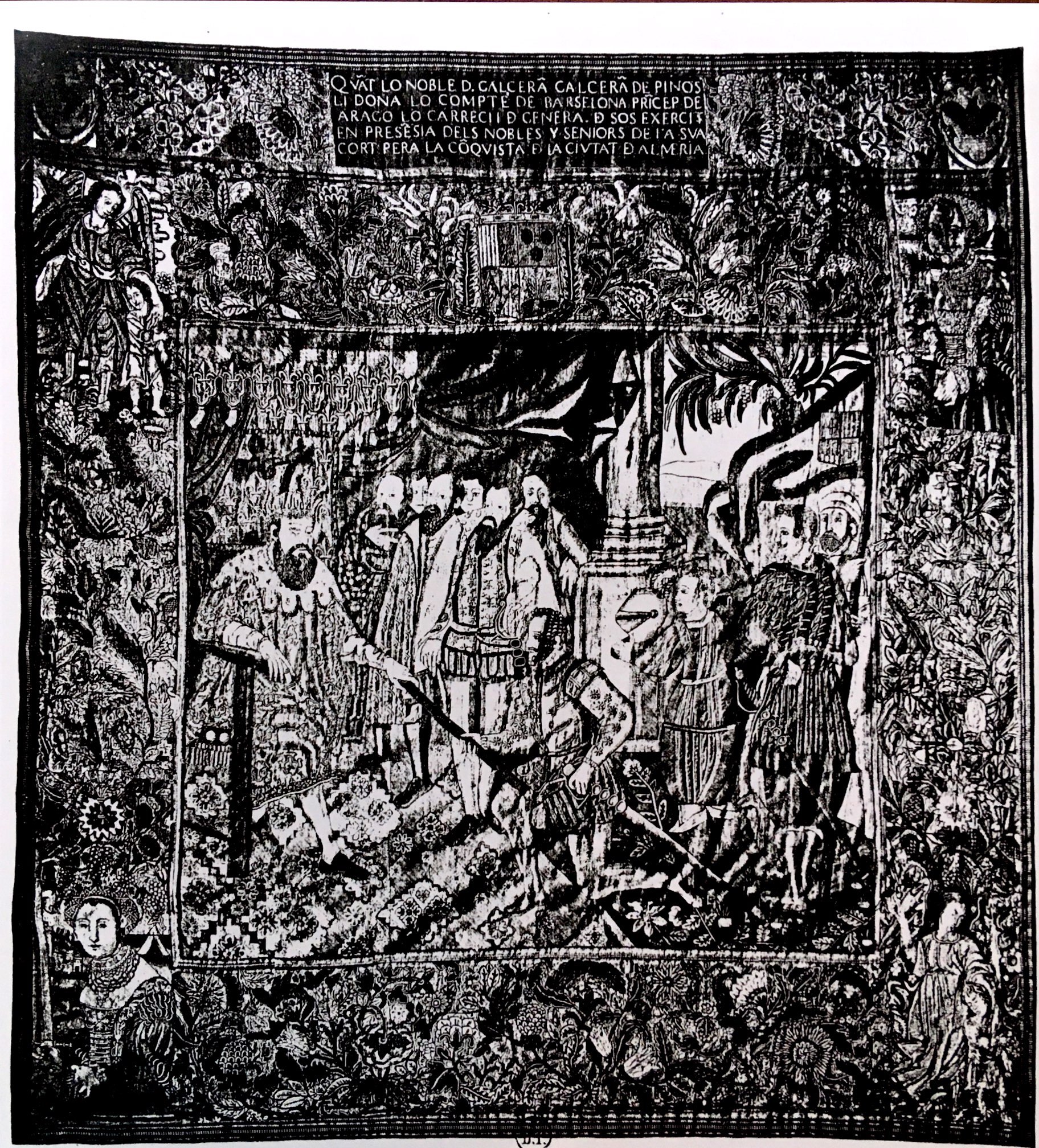 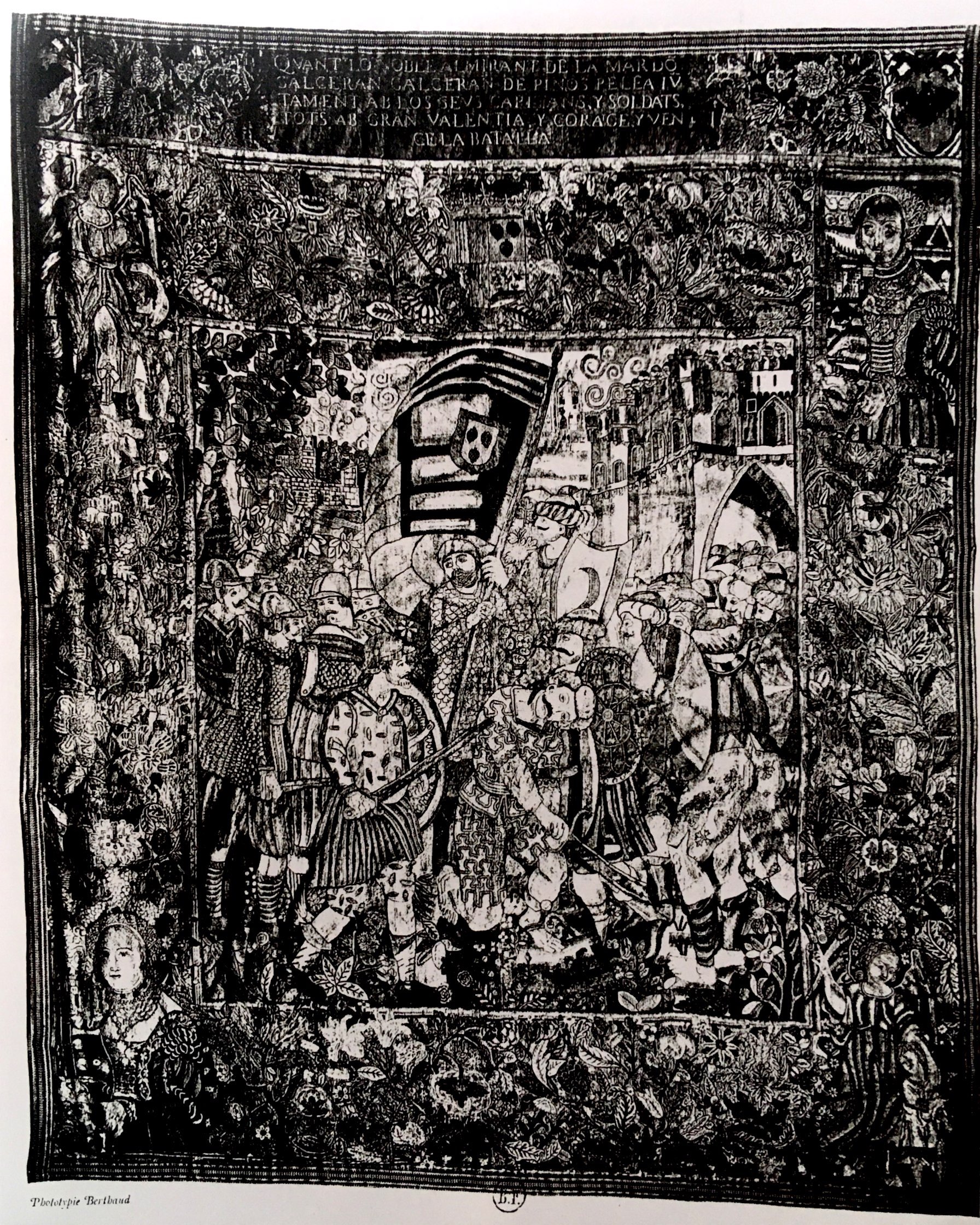 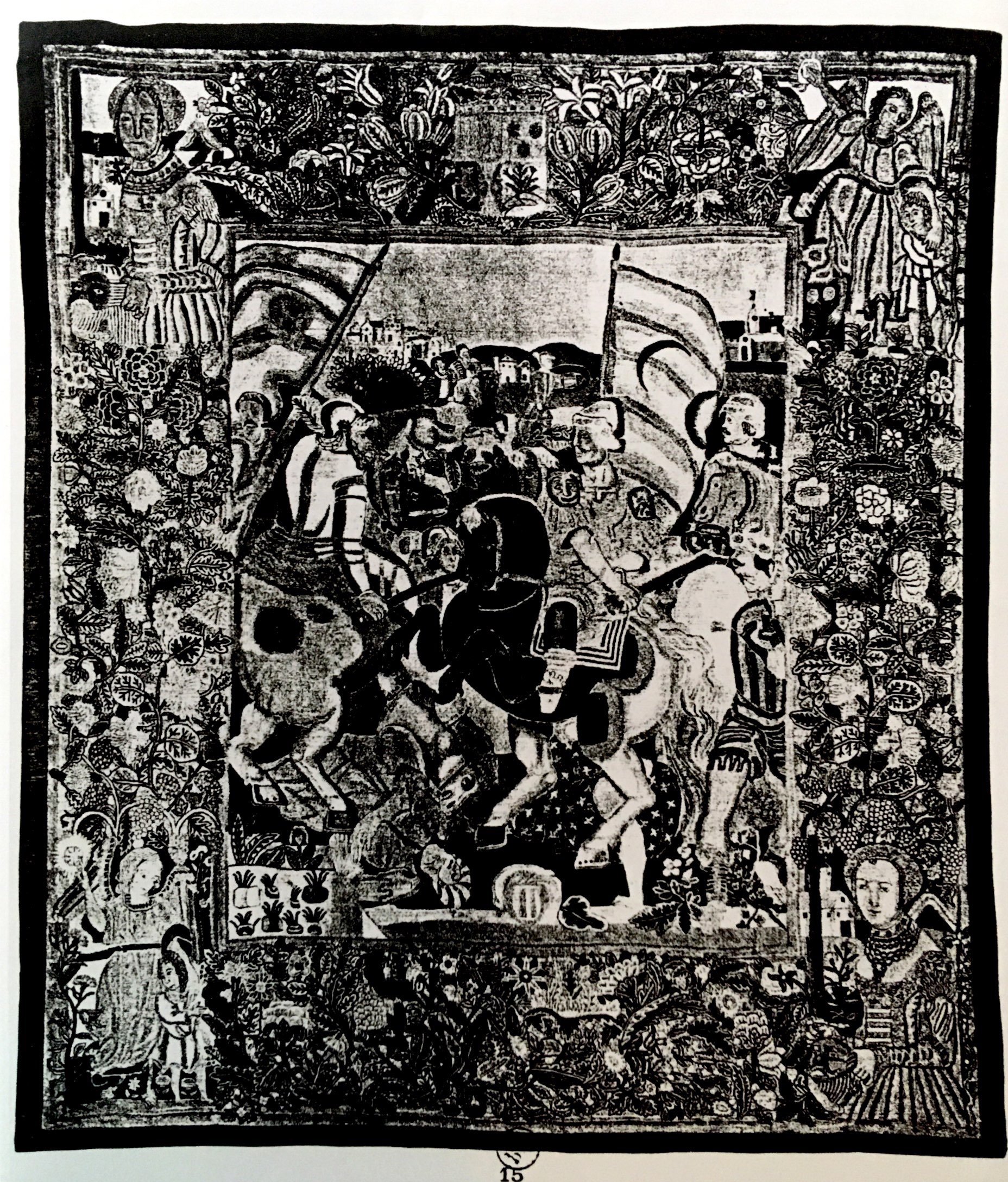 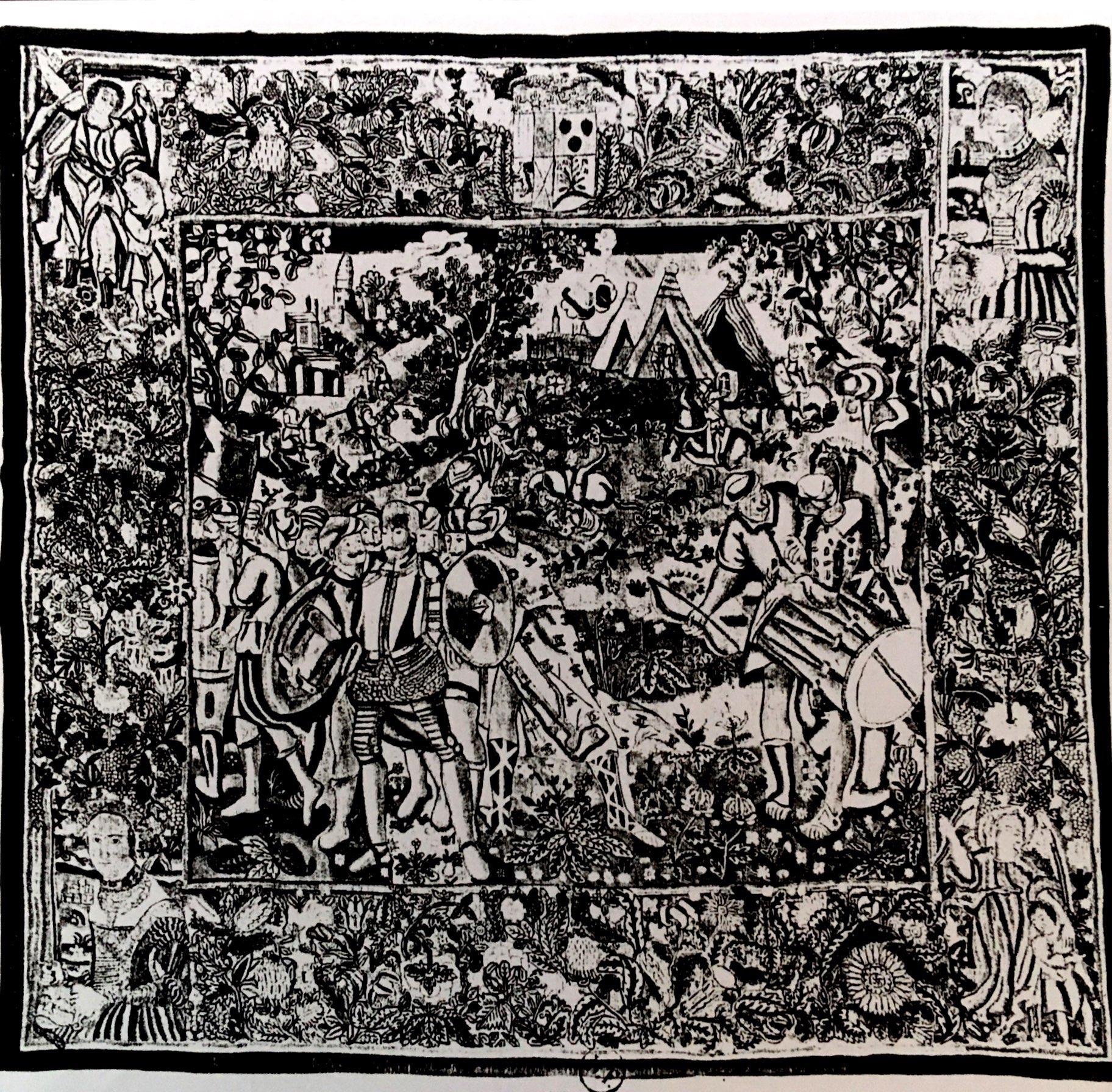 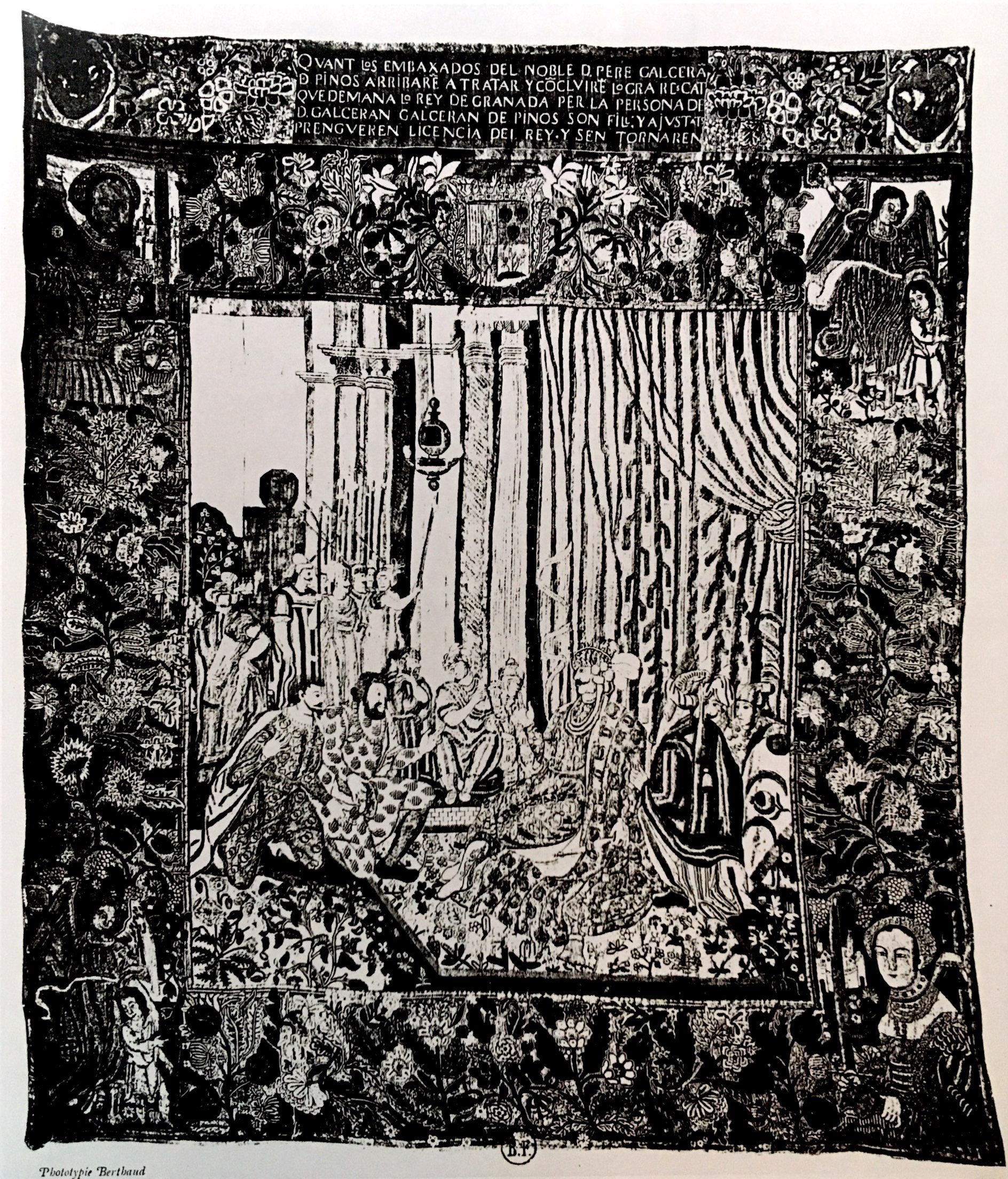 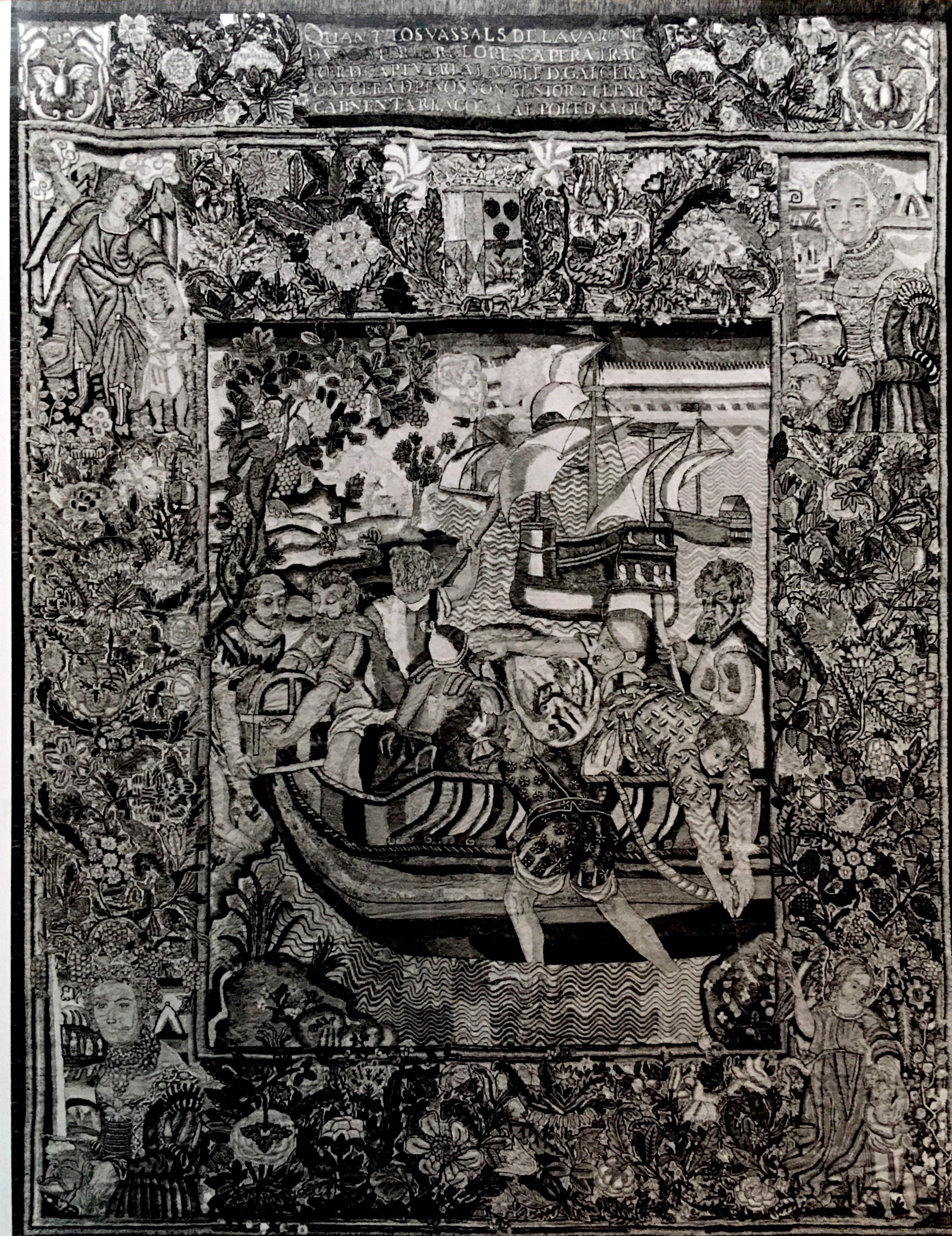 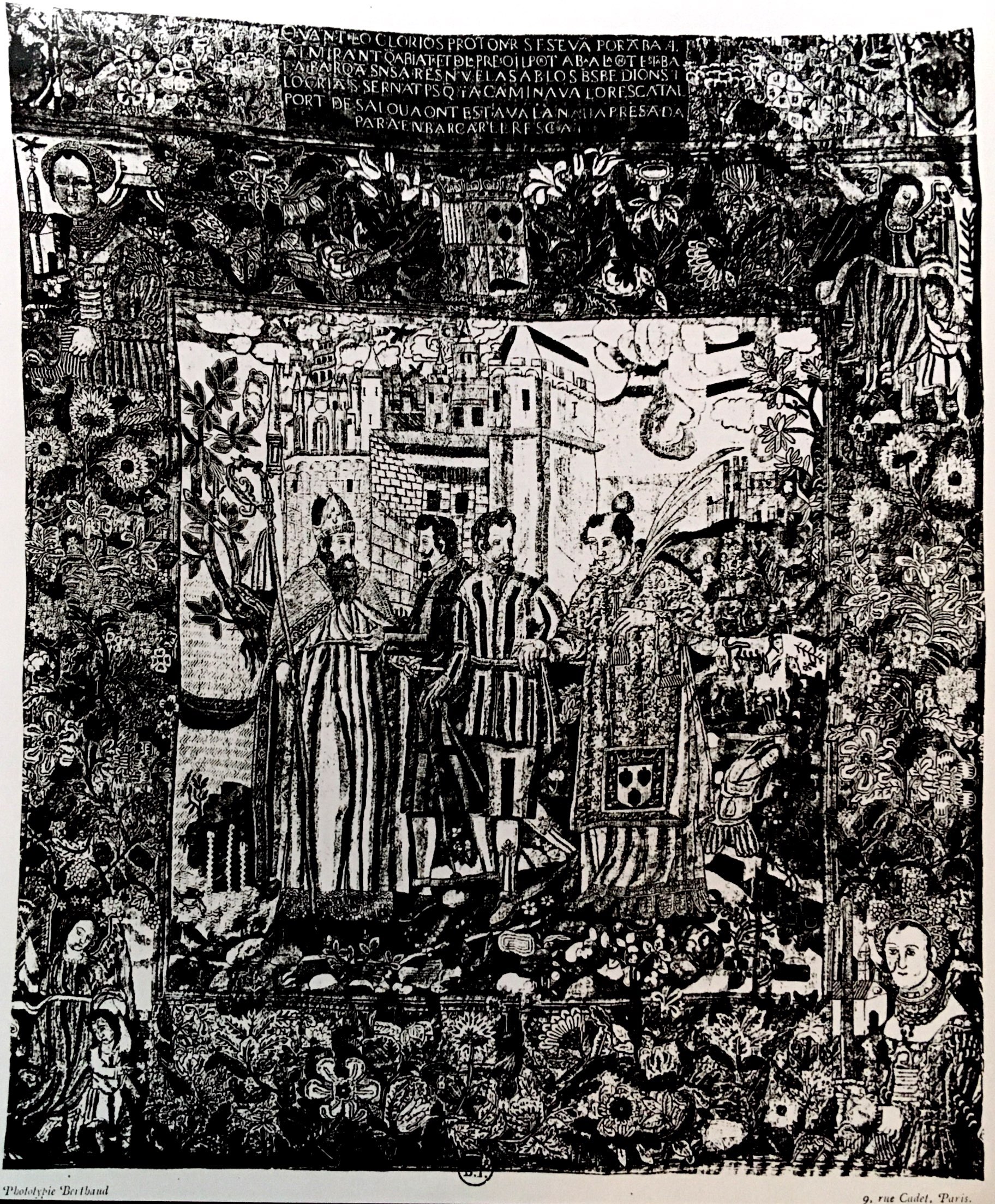 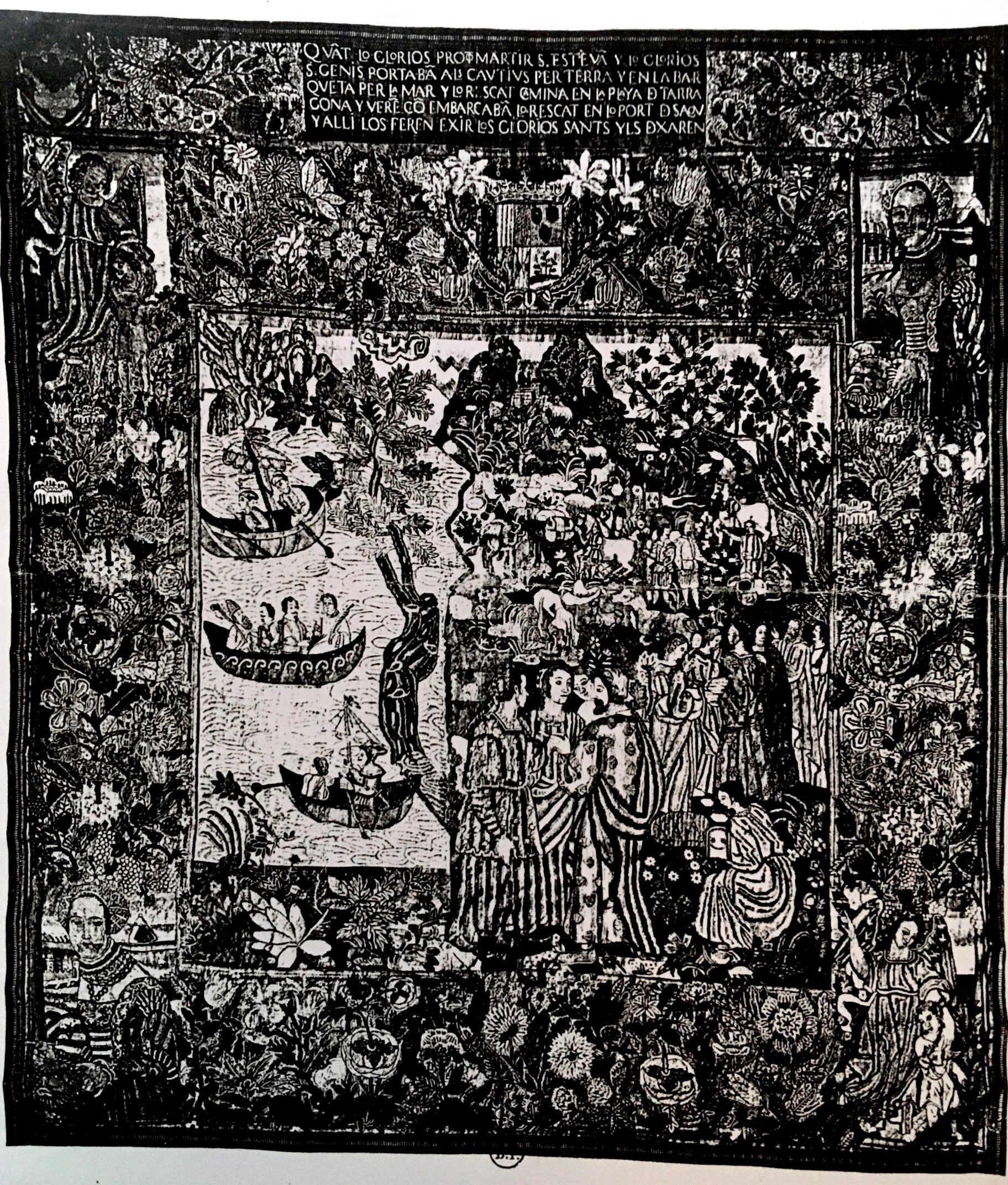 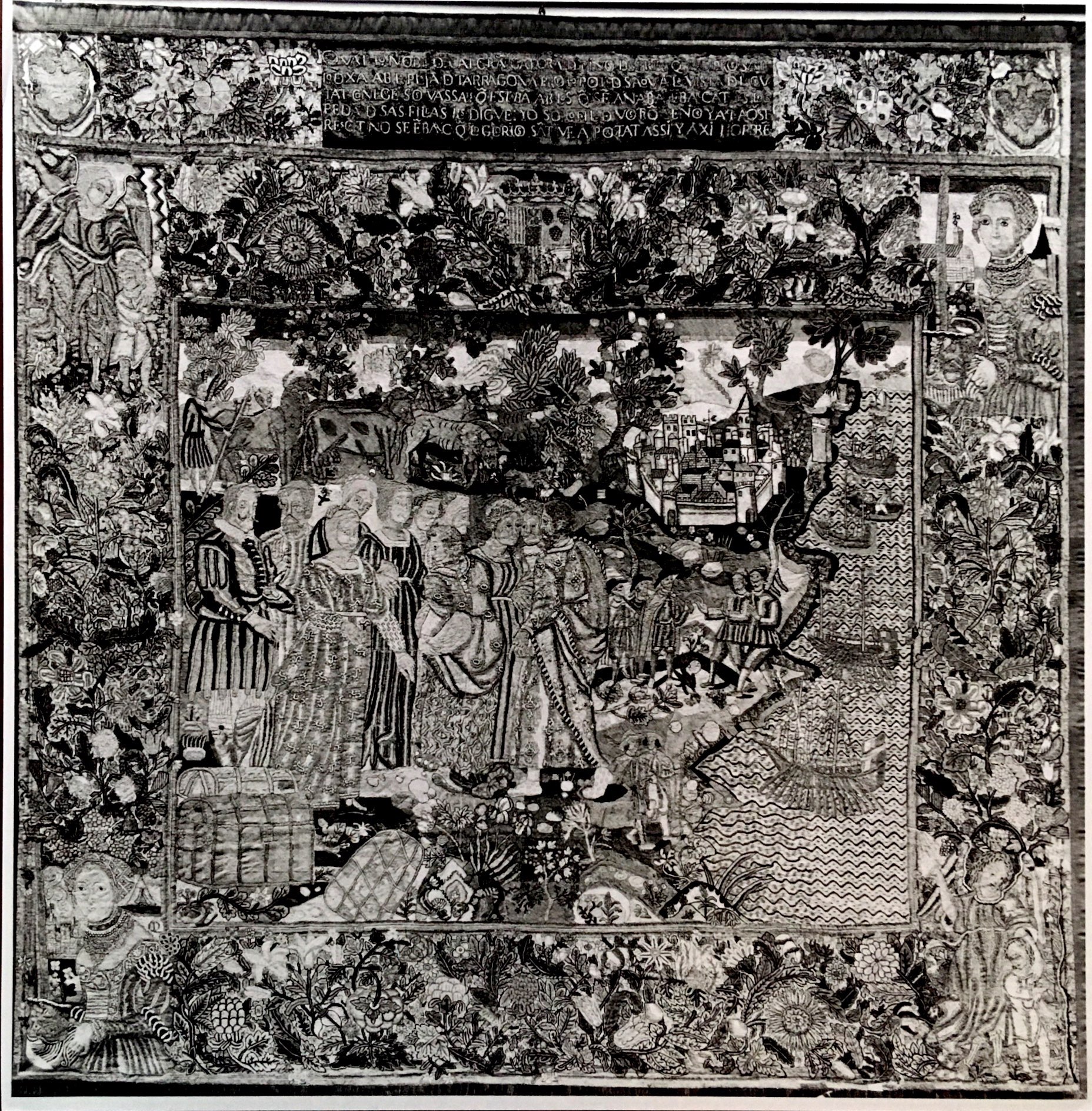 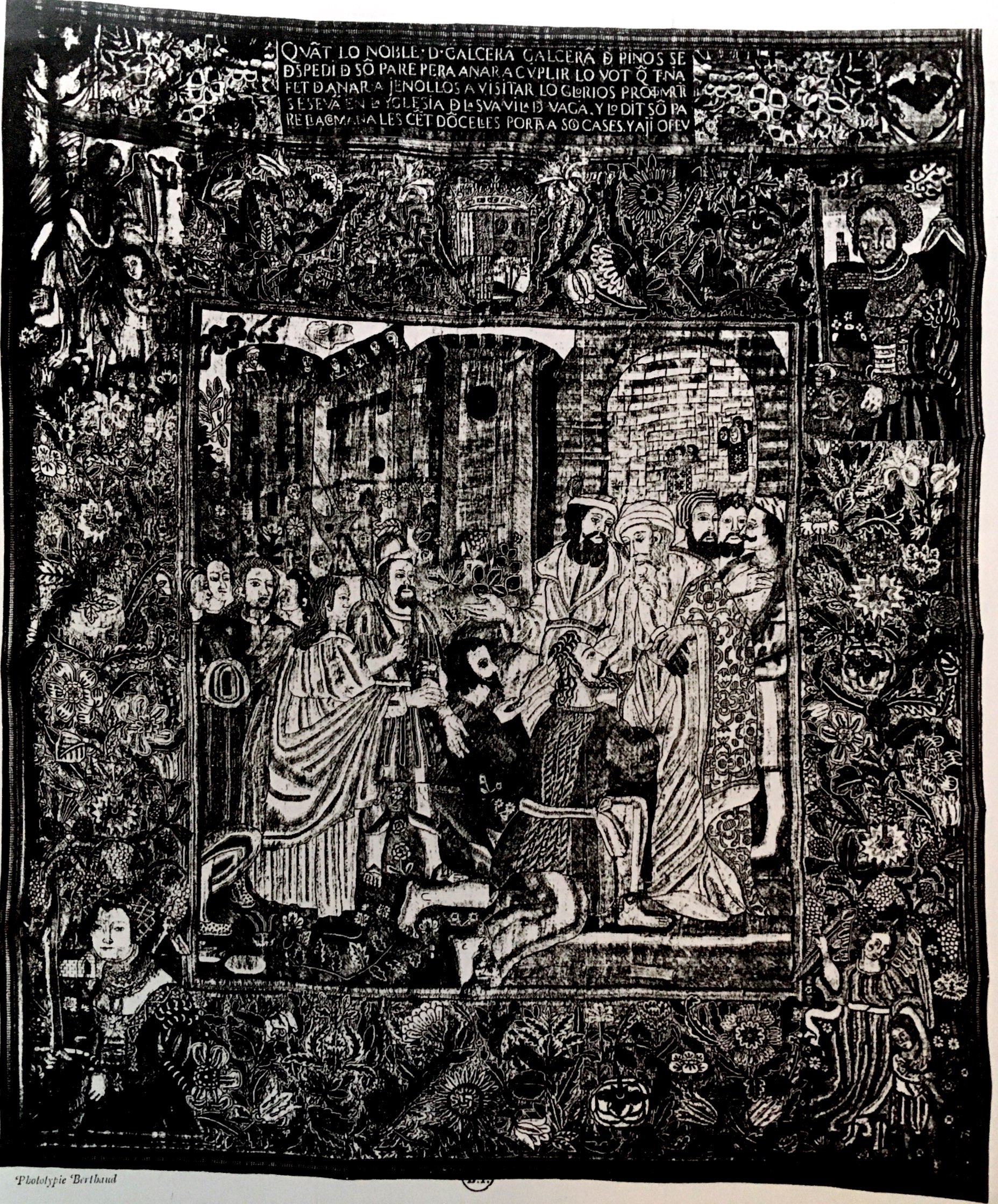 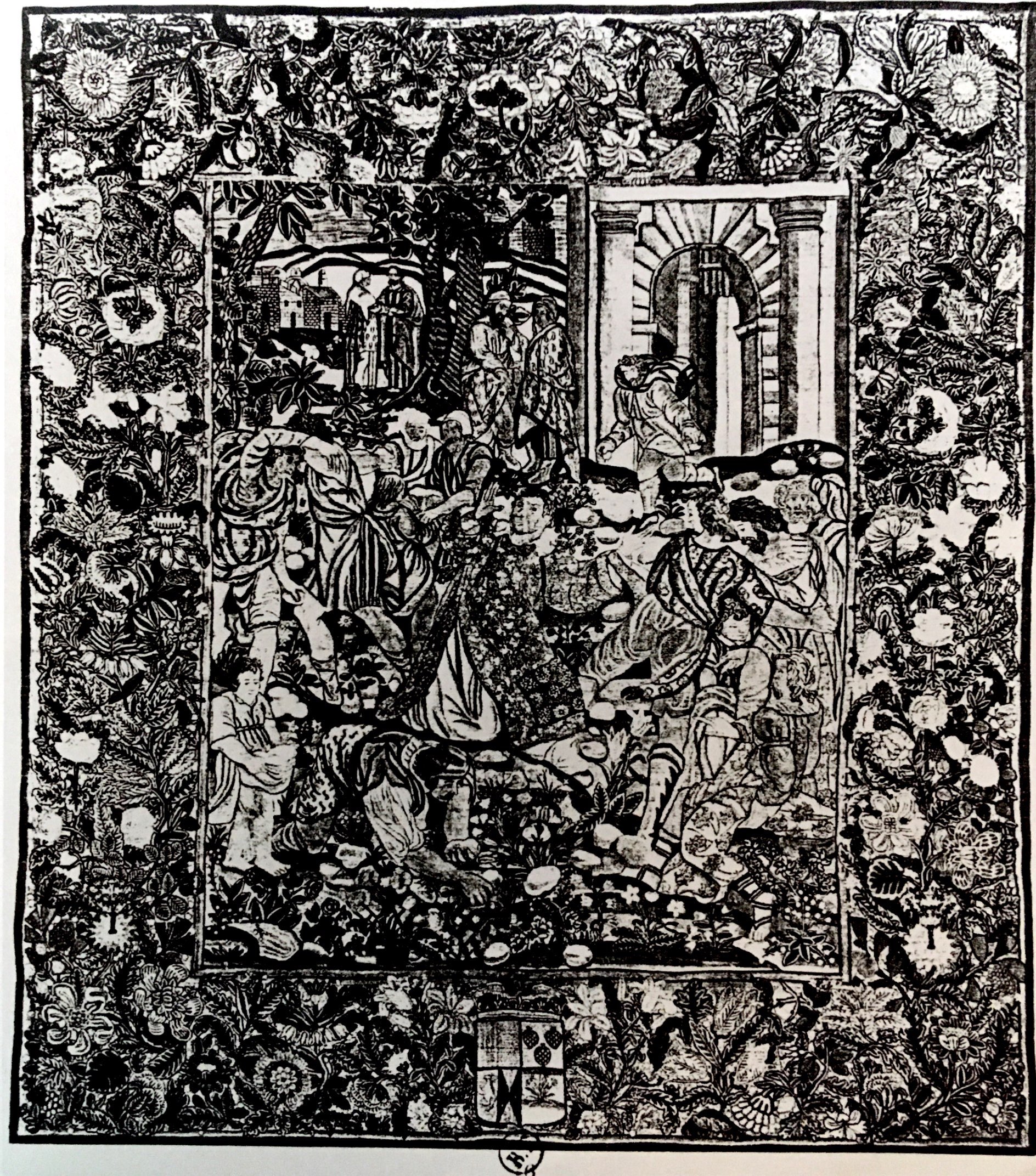 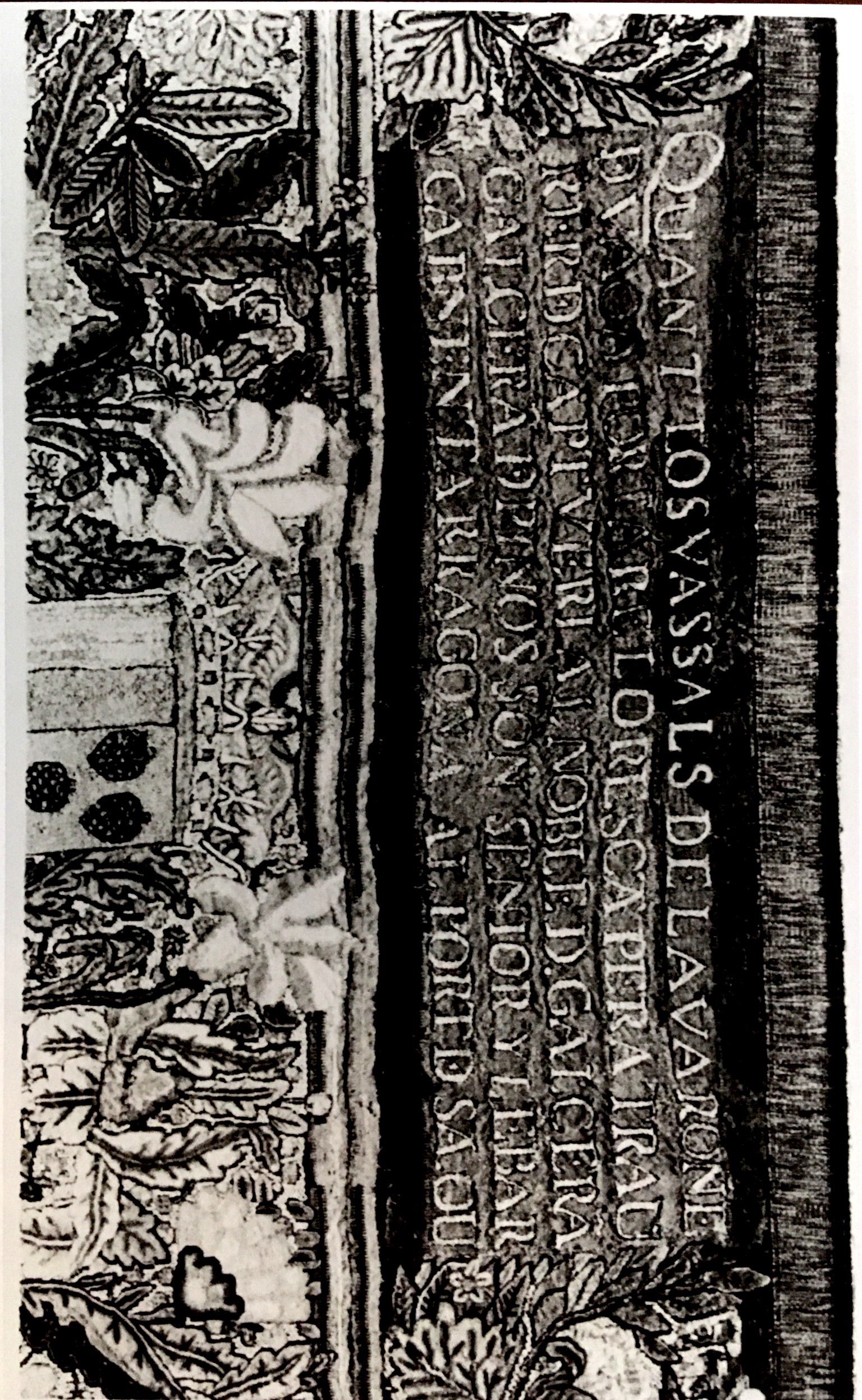 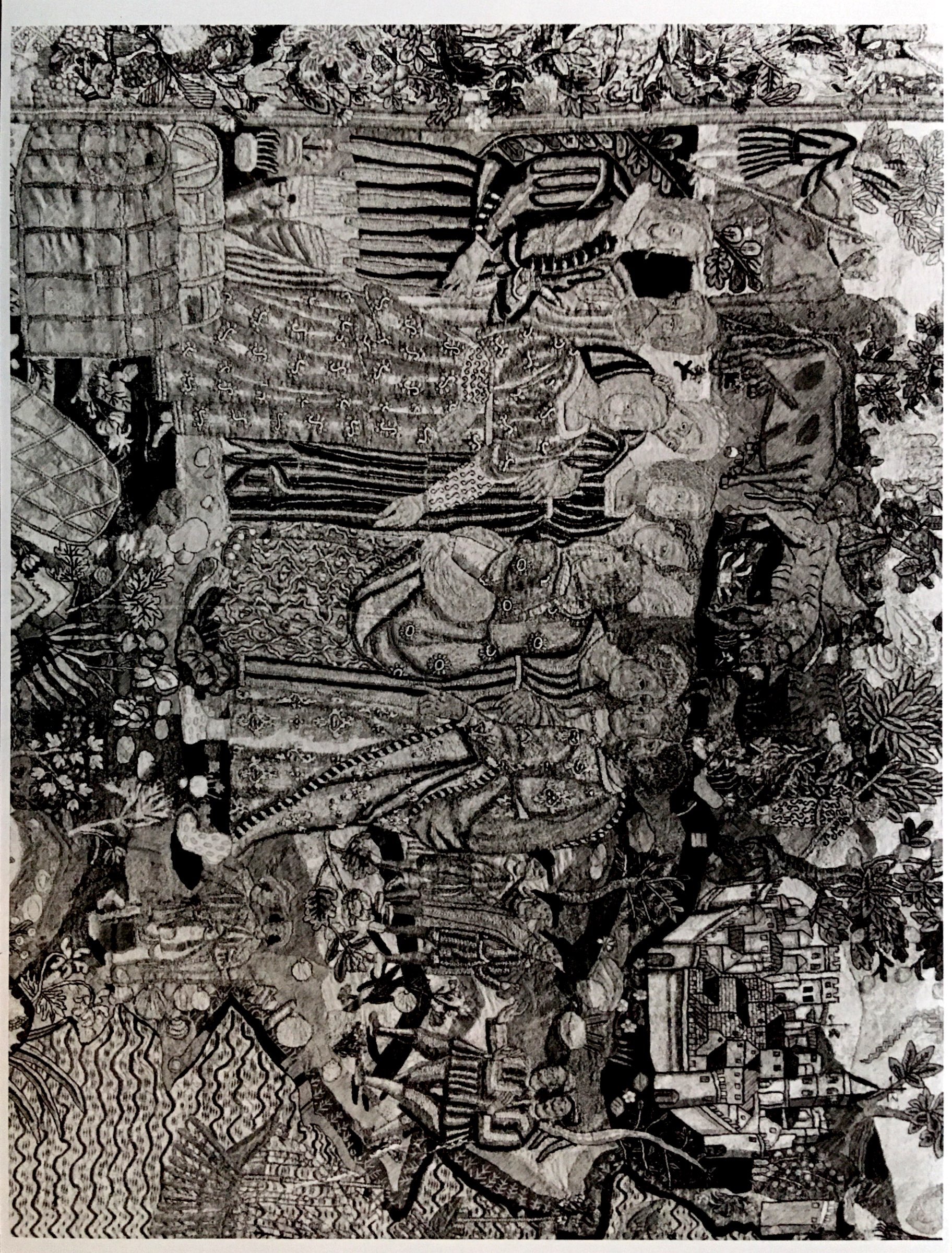 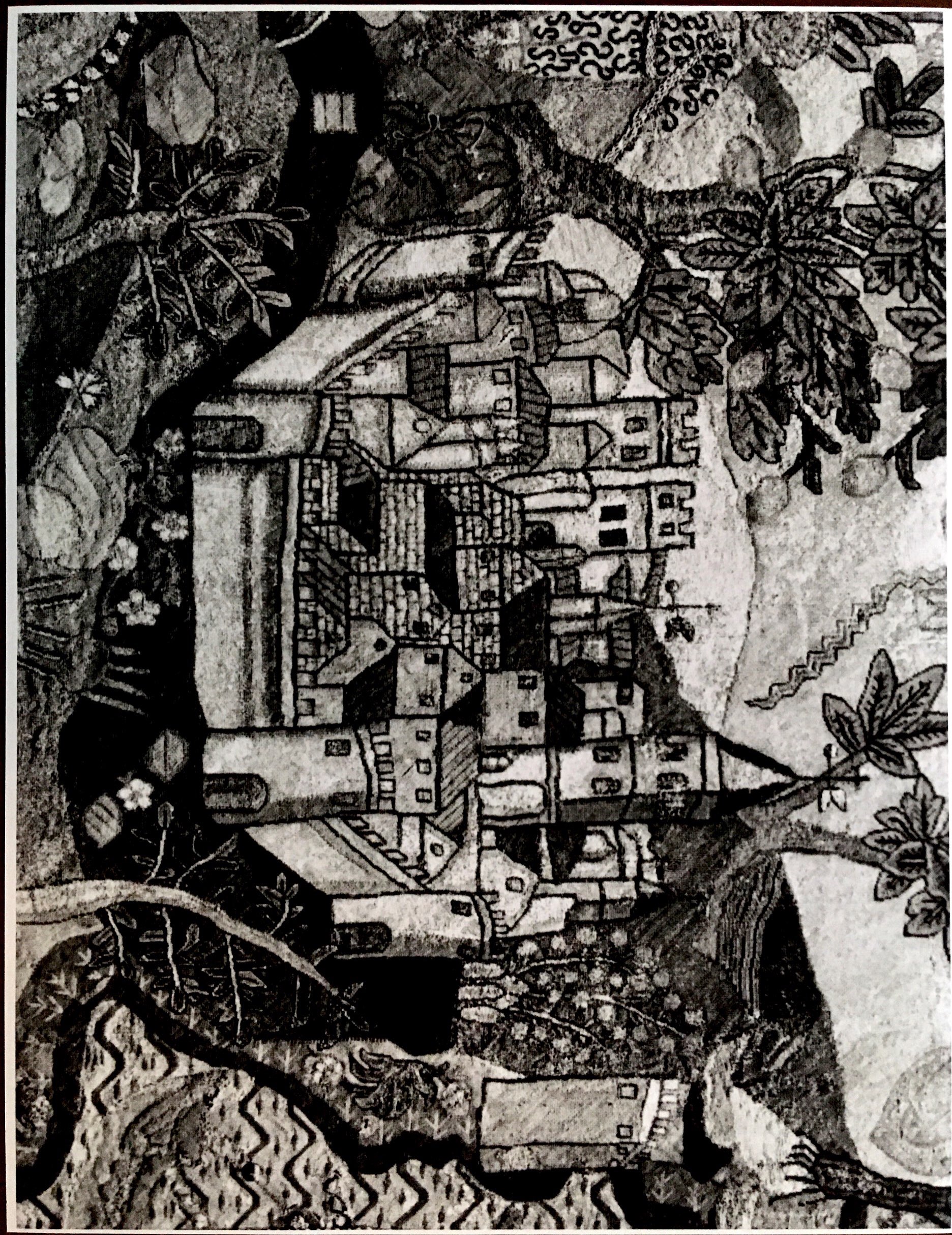 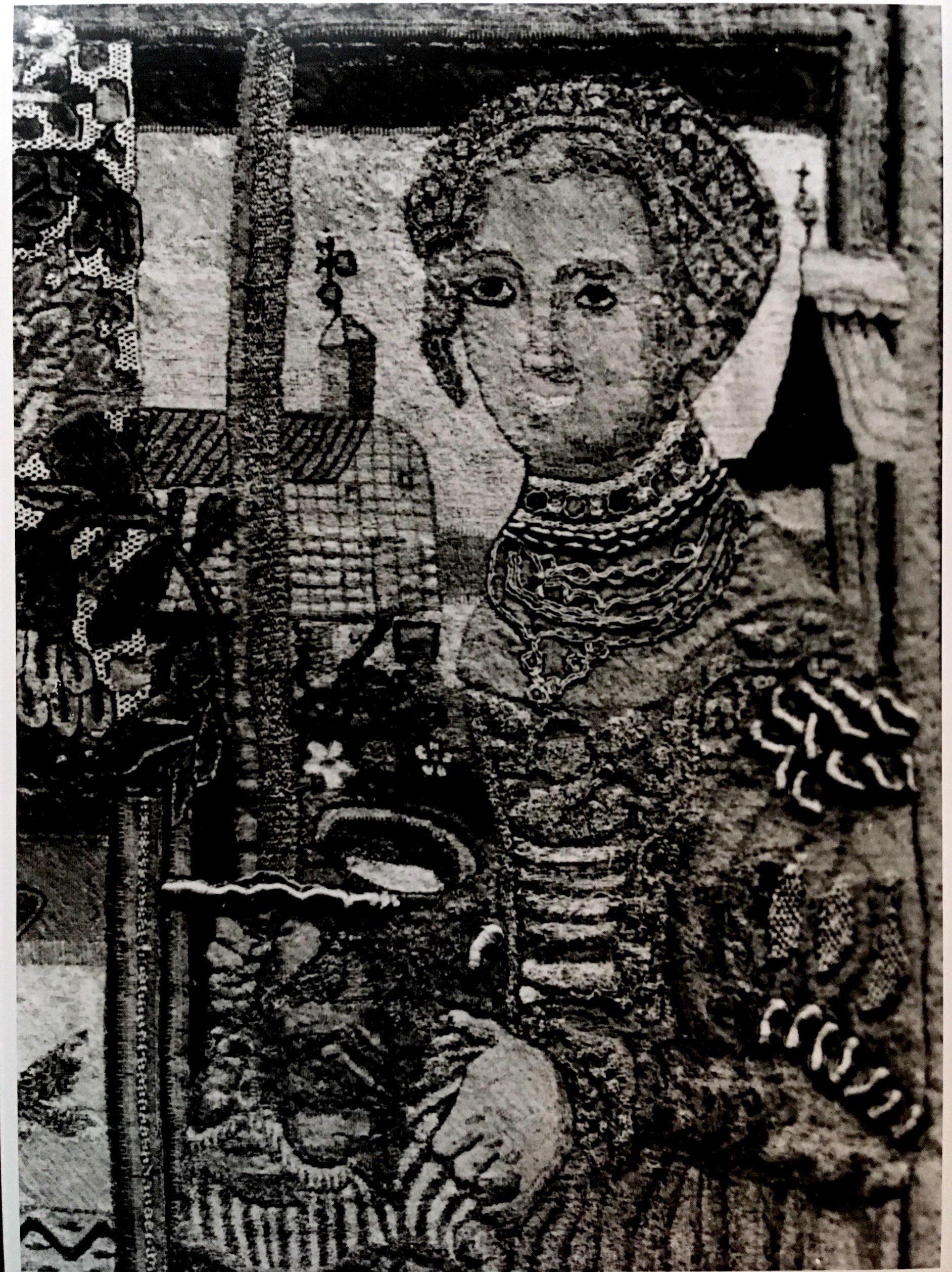 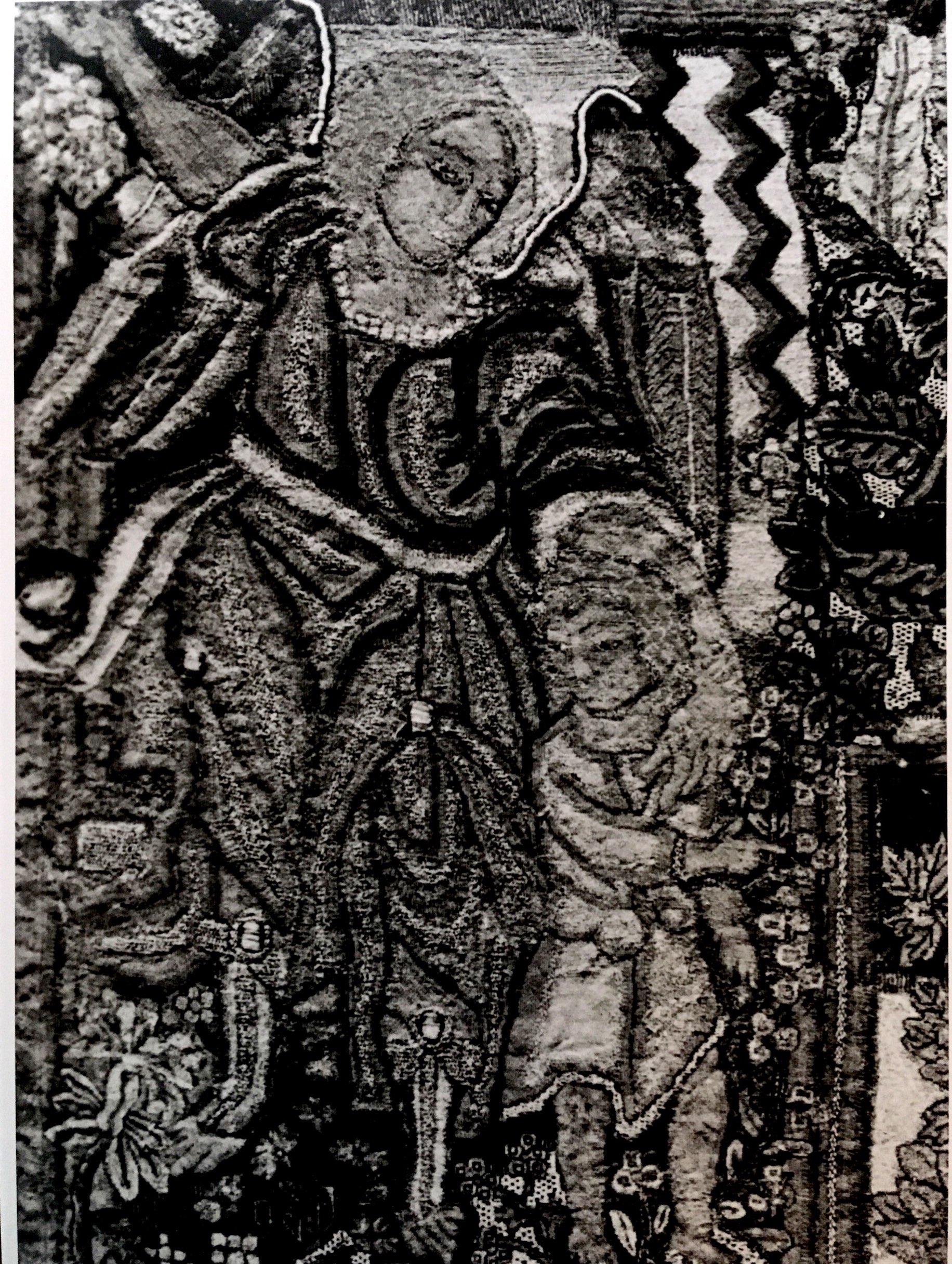 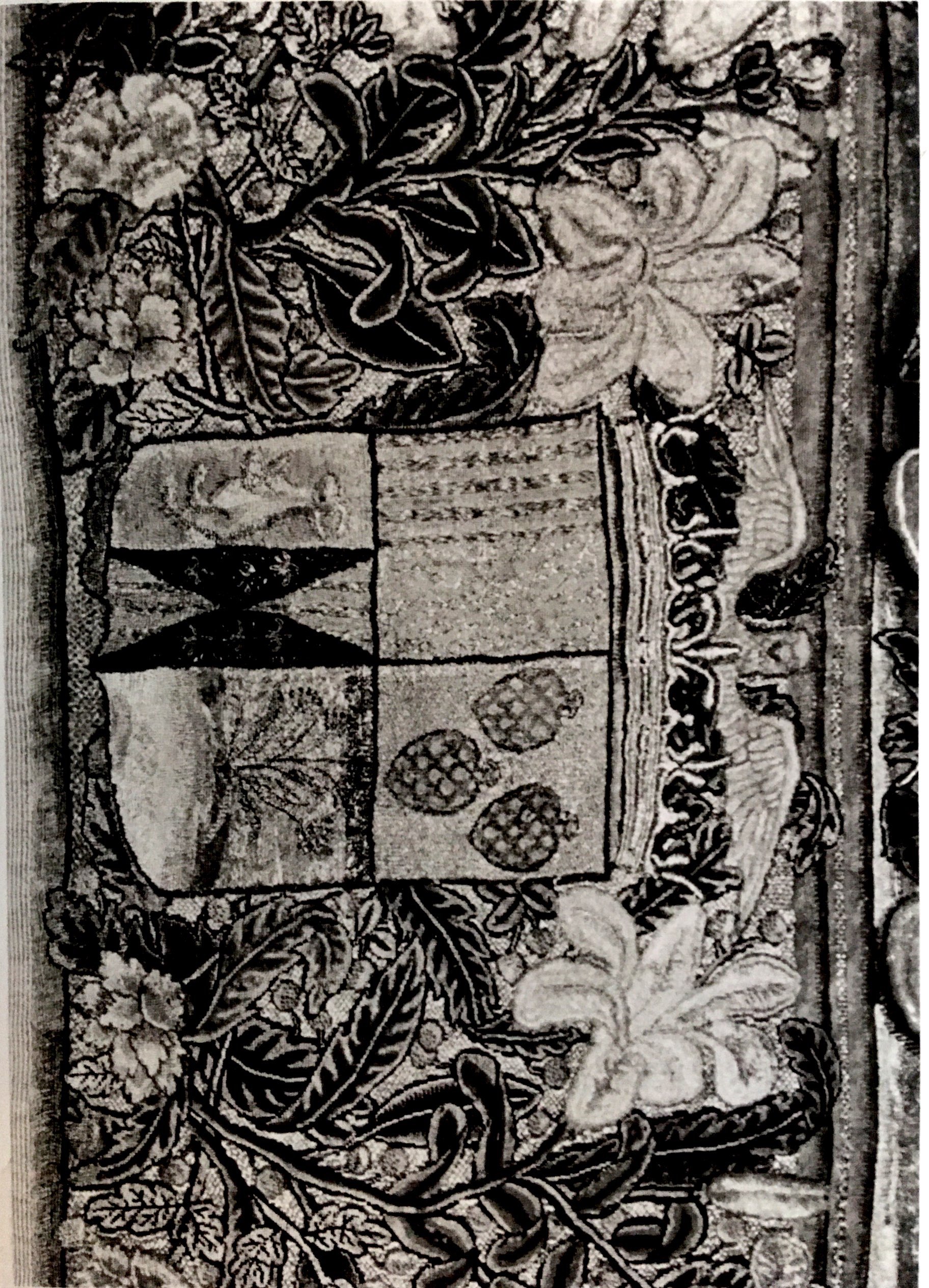