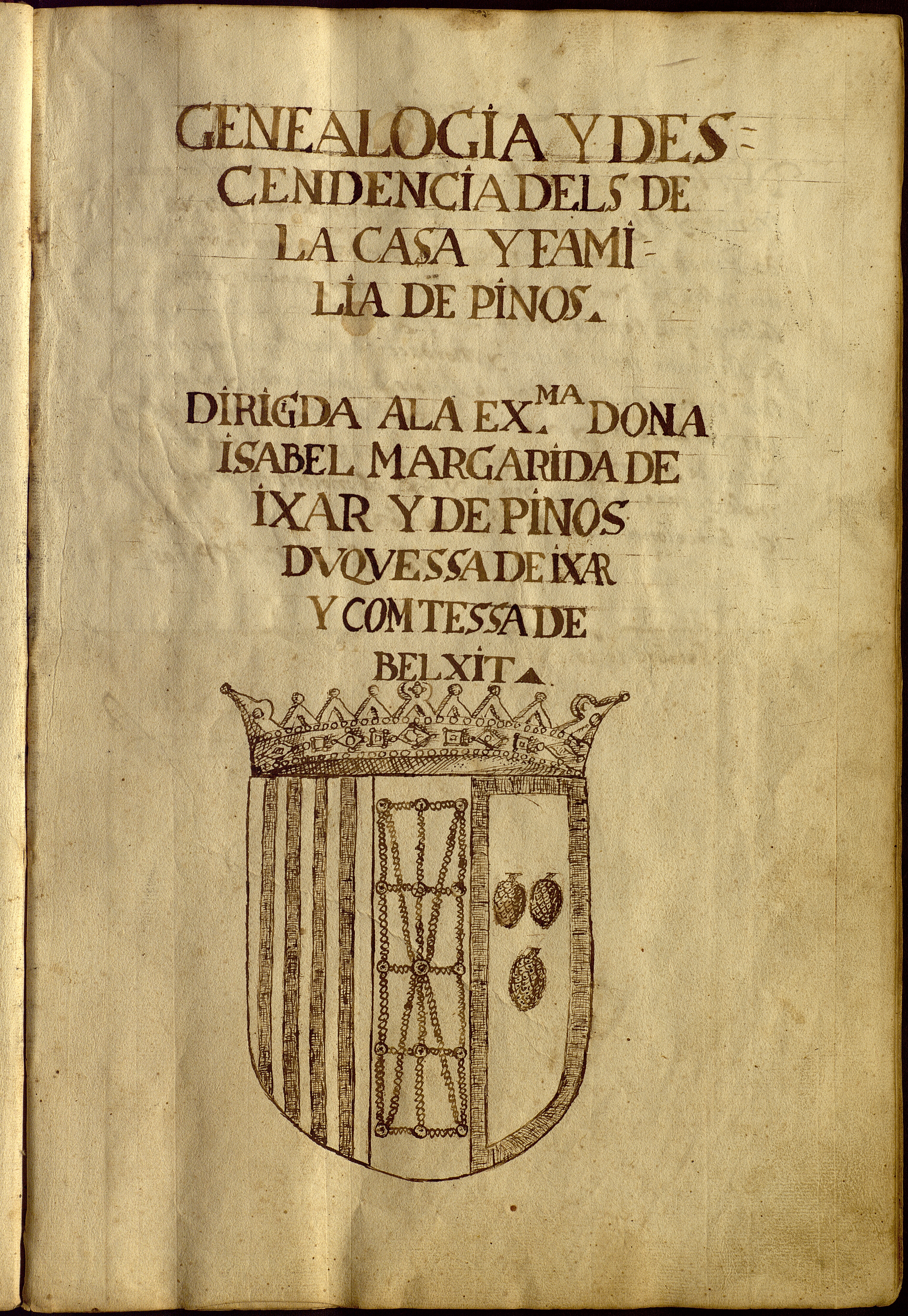 Illustrations of the legend written in the manuscript: Genealogy and the Descendants of those of the House and Family of Pinós. Directed to the Excellency Isabel Margarita de Híjar and Pinós, Duchess of Híjar and Countess of Belxit, written by Bernat Galceran de Pinós in 1620, and kept at the AMSMB.

The chronicler Jeroni Pujades († 1635) recorded in his Diary that on May 16, 1610 the offertory of the Mass of consecration of the new bishop of Barcelona, Joan de Montcada, was carried out by six knights. In Pujades’ opinion, the particular intervention of those offerers had been very well received by the Barcelona society at that time, partly because it made visible the unity “in the spiritual” of “three houses of the nine barons who entered into the conquest of Catalonia: Montcadas, Erills and Pinosos” (Pujades, 1610 [2, 153]). He referred, of course, to the history of the arrival to Catalan lands of Otger Cataló and his nine companions to fight the Muslims in the days of Charlemagne. According to the tradition, the same Otger would have arrived first in the company of the original ancestors of the Montcadas, the Pinós and the Mataplanas, whereas the one of Erill would be the last one when treading the future Catalan counties. This was equivalent to affirming that, due to the antiquity of their families, the offerers belonging to the three lineages mentioned in the Pujades appointment were a step above the Ivorra, Burgés-So and Meca-Clasquerí, who had also participated in the offertory.
In the middle of the 21st century – to use a common expression – one might think that there was probably no need for such creativity. In the end, not only the ancestry of the Montcada, the Erill and the Pinós could be traced almost certainly to the twelfth centuries, but also that their members were part of the aristocratic elite that usually receives the label of “certified”, that is to say, possessor of noble titles. Thus, in 1610 the Montcadas, headed by Gastó, viceroy of Aragon and brother of the aforementioned bishop of Barcelona, came from a branch of the lineage that in 1581 had passed from being a lady of the barony of Aitona (at Segrià) to being an homonymous marchioness. They were from Pallareos, the Erills had become counts in 1599, that is to say, exactly the same year that the Pinós had obtained the titles of counts of Vallfogona (Ripollès) and Guimerà (Segarra) which, as will be seen later, they would add to the viscounts that they already enjoyed in the lands of Roussillon and Conflent (Molas i Ribalta, 2004: 55-60, 74-78 and 91-94). In the opinion of Jerónimo Zurita (†1580), official chronicler of the Kingdom of Aragon, this was reason enough to overcome, in the 16th century, the excess of creativity in the origins of the lineages theoretically born of the Cataló’s adventure. After all, it was accepted that his “Nobility and great antiquity (…) is truly the most confirmed and known in Spain” (Zurita, 1562: I, 3). However, the emergence of opposed voices to the fictitious origins of noble families among authors that historians now consider as authorized, such as Zurita himself, did not cause the abandonment of those traditions; Rather, on the contrary, it was in fact in the ages of the Modern Age when the number of texts referring to the past of noble lineages grew, and surely one of the times when creativity raised of those responsible for its elaboration, whether or not they were the same nobles.
In the end it was a question of choice that depended on the individual’s mentality. That said, in the 17th century, as in the immediately preceding and later centuries, this individual mentality was strongly conditioned by the family—definitely the basic cell of social organization at all levels—the socio-economic position of this and the interests of adults with a recognized political authority over their relatives. The more a family was on the socioeconomic scale, the more pretensions and options to ascend had their members, the greater would be then their need to gain legitimacy, which usually implied giving shape to the past or defending a past already created. At this point, antiquity played a key role. Belonging to an “ancient” lineage was convenient for the nobles, because in a social context in which tradition and old habits prevail over novelties, antiquity was undoubtedly a sign of prestige and a certain preeminence insurance.
Obviously, if the lineage itself did not yet have a past to meet its needs and pretensions, one would have to look for one. However, none of this means that there has never been a previous family memory; it would simply have been an oral narrative that could be finally put in writing, modifying or deforming it to make it fit satisfactorily in a context that is different from that in which it would have been developed orally. In any case, whether it was to build a new past or to recall and/or adapt an old one, it was about generating a writing, a solid narration that allowed the members of the line claim to the desired level. Therefore, depending on the adaptation effort that the editor should carry out to adapt the memory of the slogan required by each context, the narrative of the narration could be through long elaboration processes.
The fact is that in 1620 one of the “Pinós” that had been offering to the Consecration Mass of Bishop Joan de Montcada suddenly understood that there was a serious need to build a narrative of those characteristics. It was Bernat Galceran (IV) from Pinós i Santcliment. Her sister cousin Francesca, daughter of her paternal uncle Pedro Galceran (IV) of Pinós († v.1591) and his wife, the Aragonese Petronila de Zurita and Peramola, had transferred the titles and inheritance of his late husband, Juan Francisco Fernández de Híjar, Duke of Híjar (Teruel) and count of Belchite (Zaragoza) († 1614), to his eldest daughter, María Estefanía, but she had died just that 1620 without leaving descendants, and the paternal inheritance had ended up in the hands of the deceased’s sister, Isabel Margarita Fernández de Híjar y Pinós. In view of his rank and his surnames, the new duchess of Híjar, who had not yet been married, had become since then— at least nominally and, in any case, with the permission of his progenitor —the maximum political authority of his relationship.

Or, as Bernat Galceran saw, “everything that is in the house of Pinós reappears (as it is fair) in Your Excellence by lady” (AMSMB, Pinós, ms 3.5.15, f. Iv). Bernat Galceran must have seemed to have found in the young Isabel Margarita the ideal person to be educated in the exploits and affairs of the ancestors and, at the same time, to vindicate the surname of the Pinós and their prestige with the hope of perhaps influencing them to get support in certain causes. This could explain the decision of Bernat Galceran (IV) of Pinós to write a genealogy dedicated to his relative Isabel Margarita, duchess of Híjar, who would take the title of Genealogy and Descent of the House and Family of Pinós.
.

Alejandro Martínez Giralt and Marta Alari Hidalgo (2018) “The genealogies that appear in the manuscript”, A: Cuadrada Majó, Coral, and Garriga Pujals, Montserrat (coord.) The rescue of the hundred maidens or of Sant Esteve. Vila-seca: Letters Section of the Cultural Association and University Rovira and Virgili: p. 59-73. 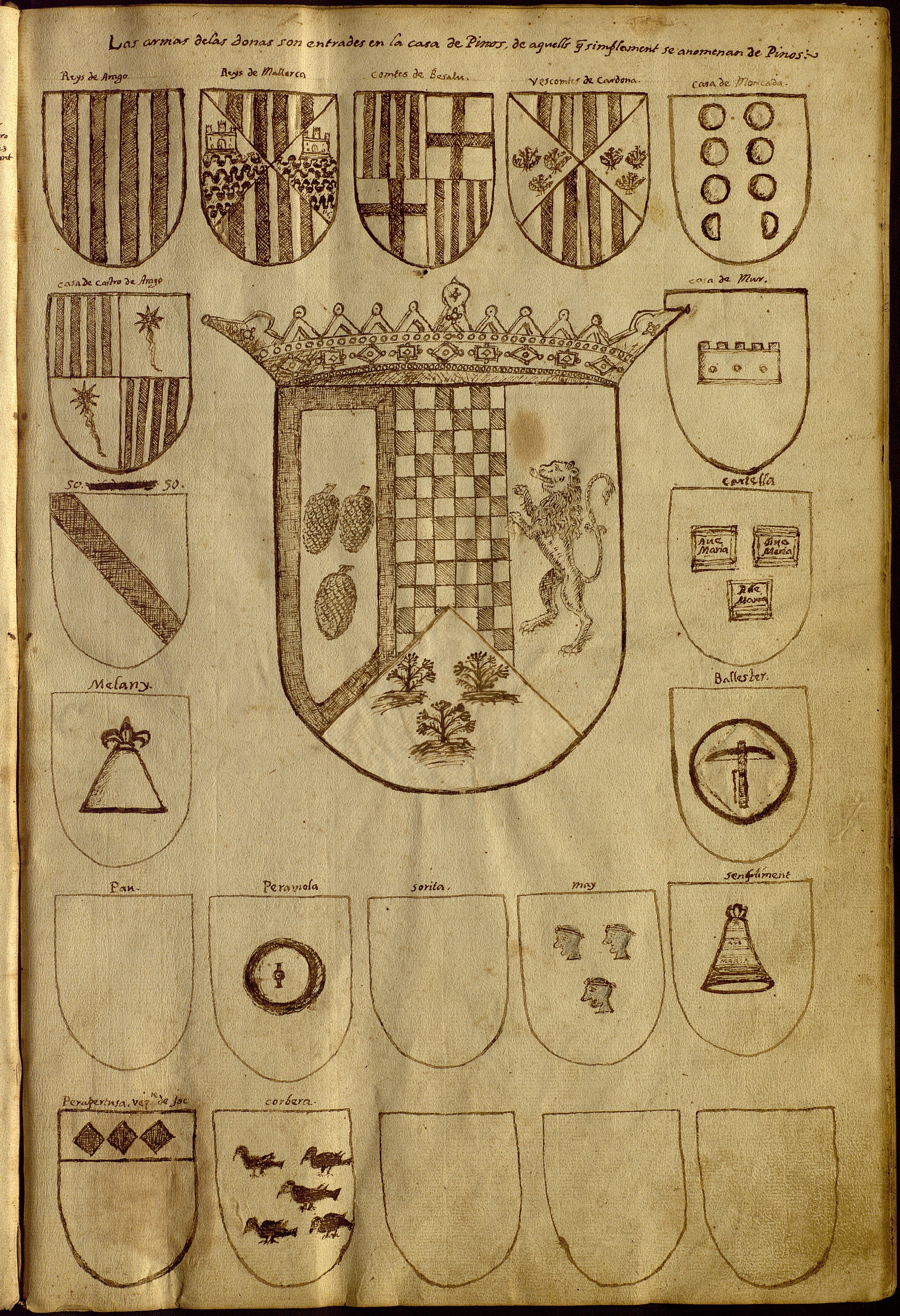 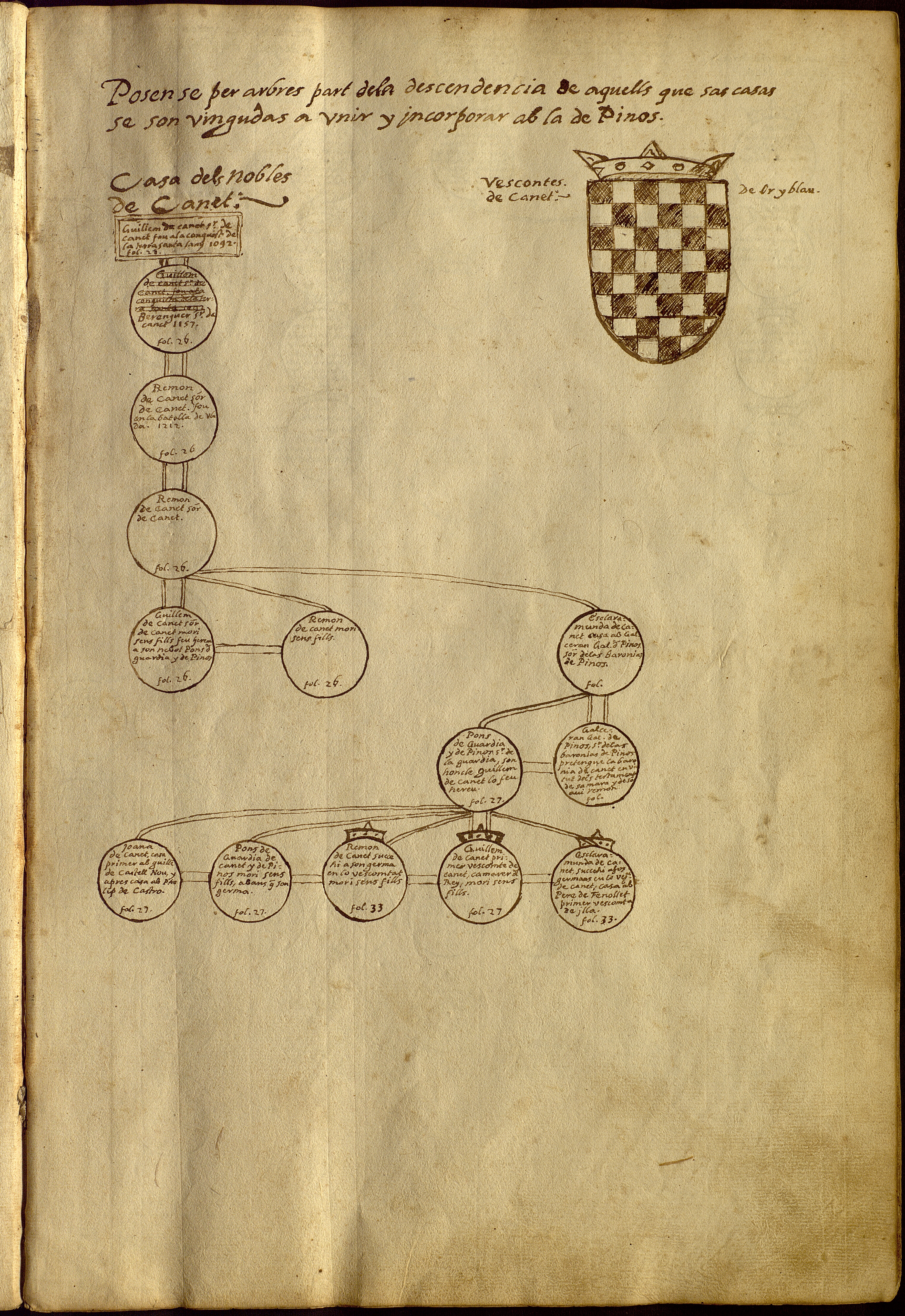 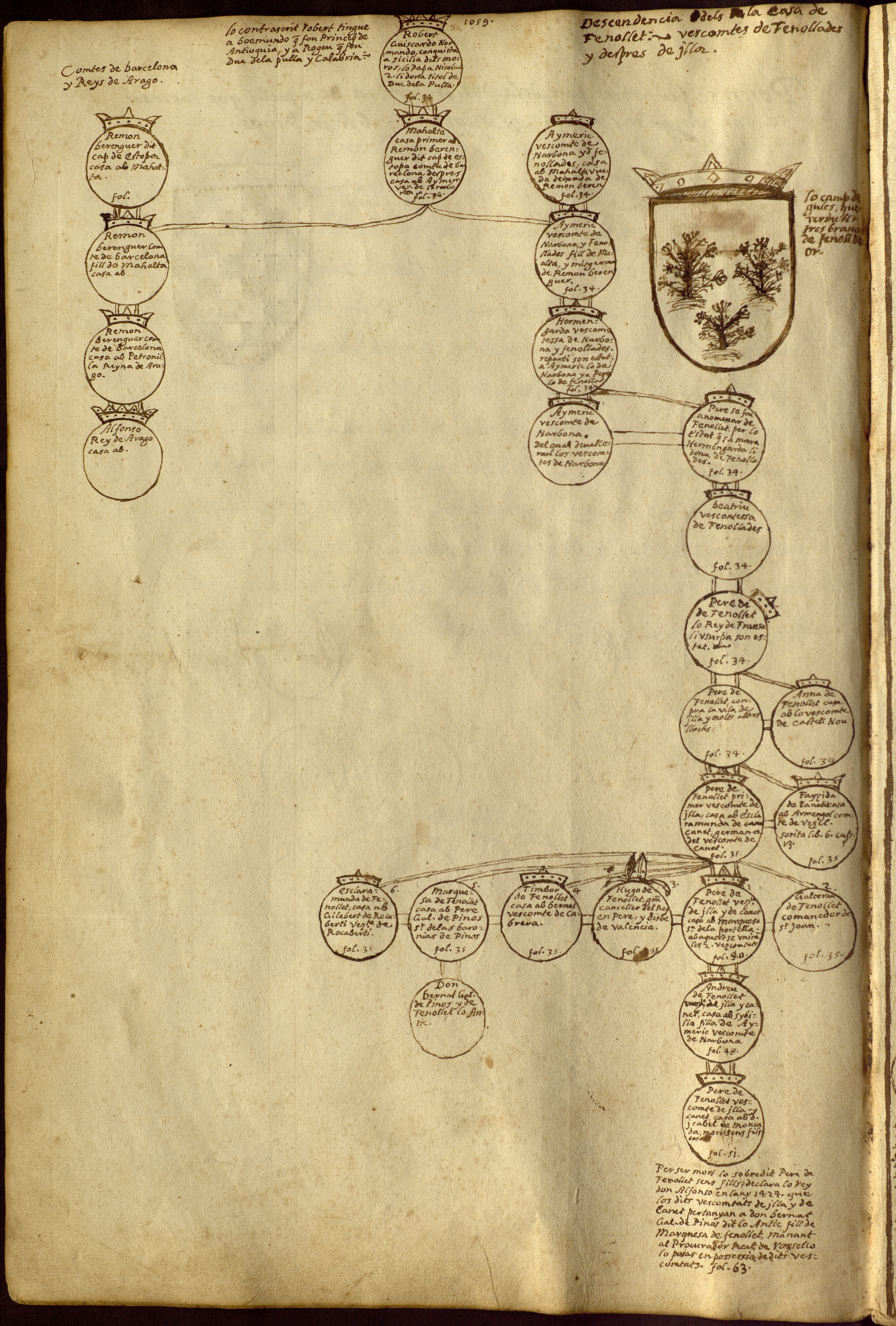 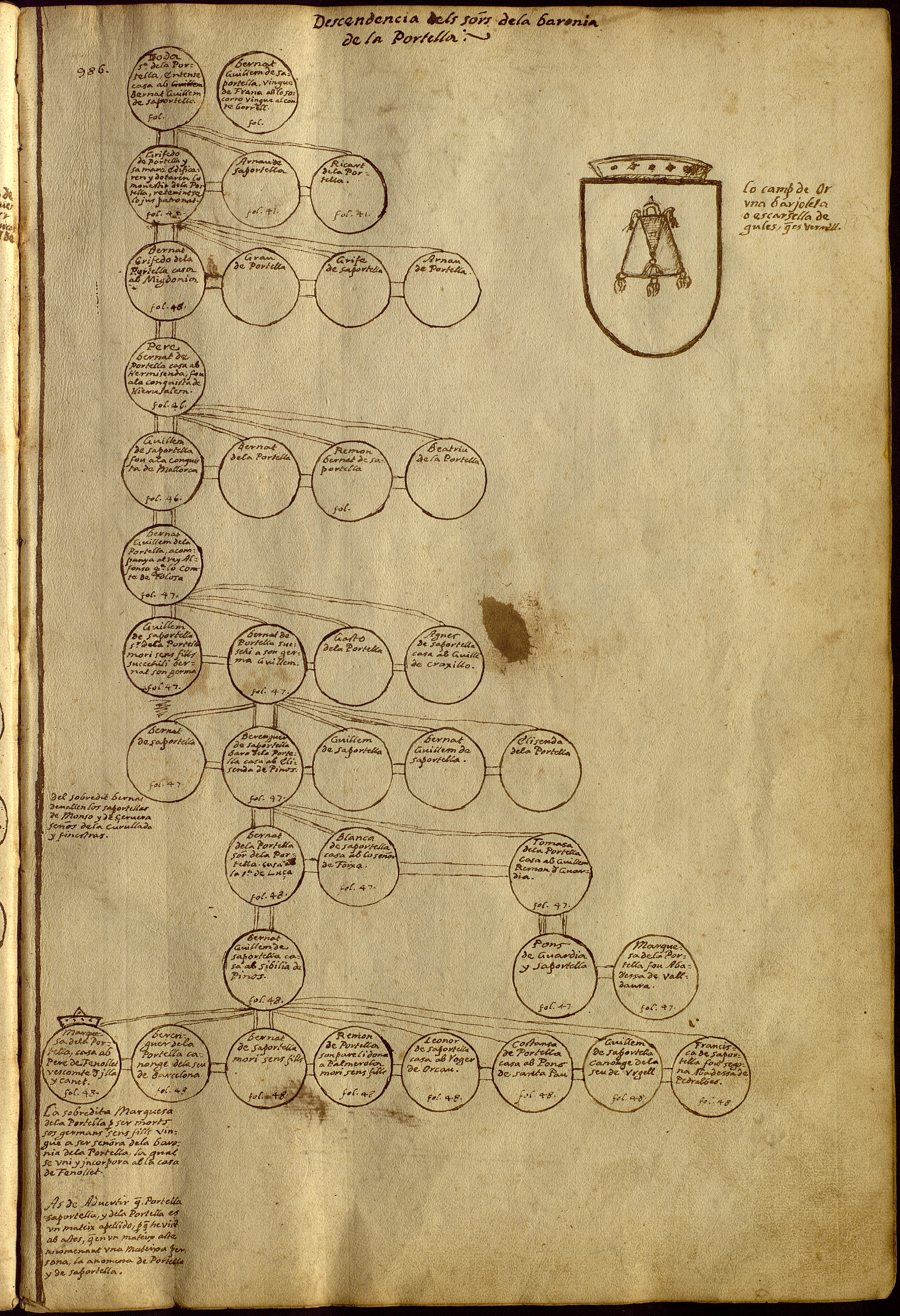 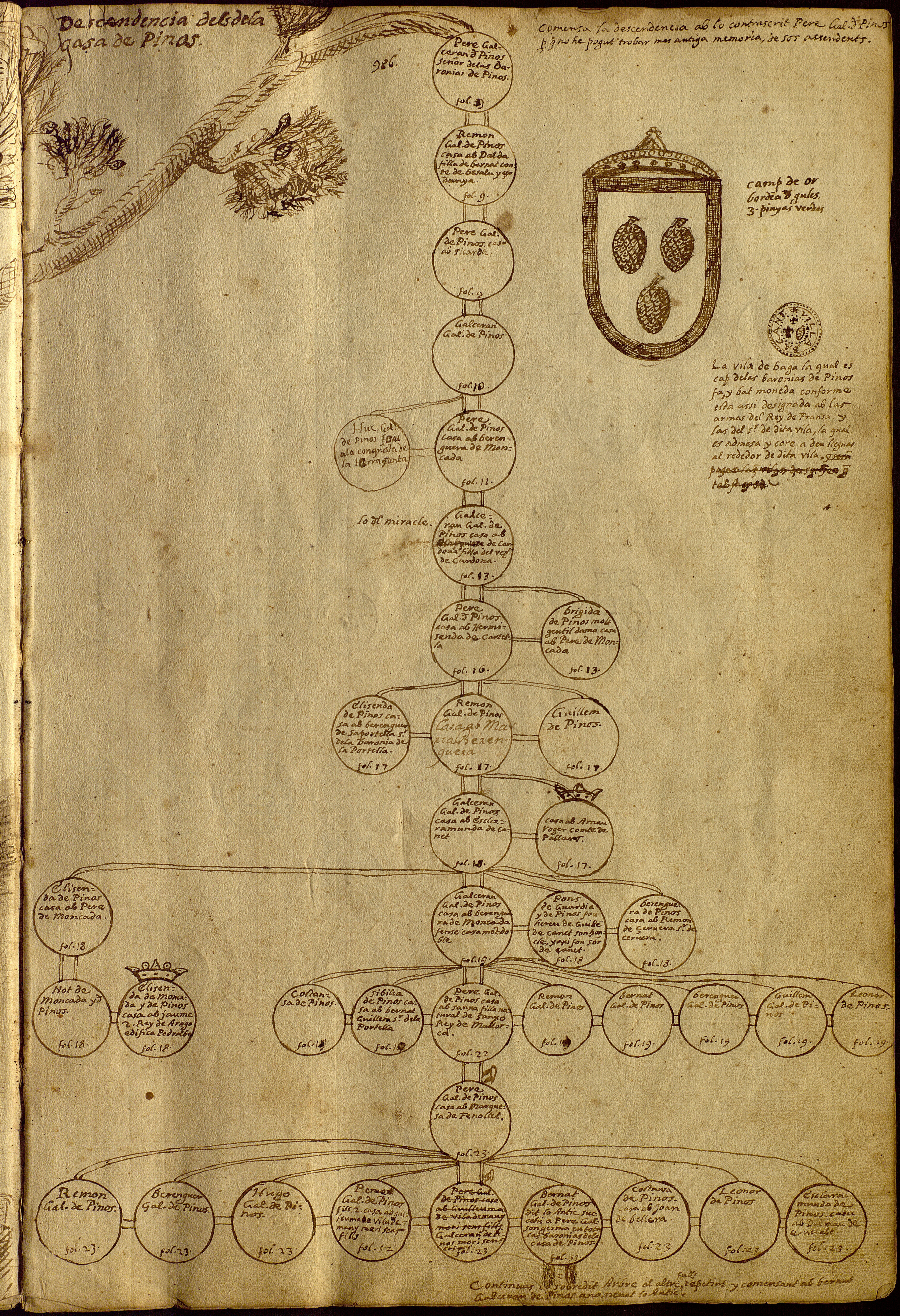 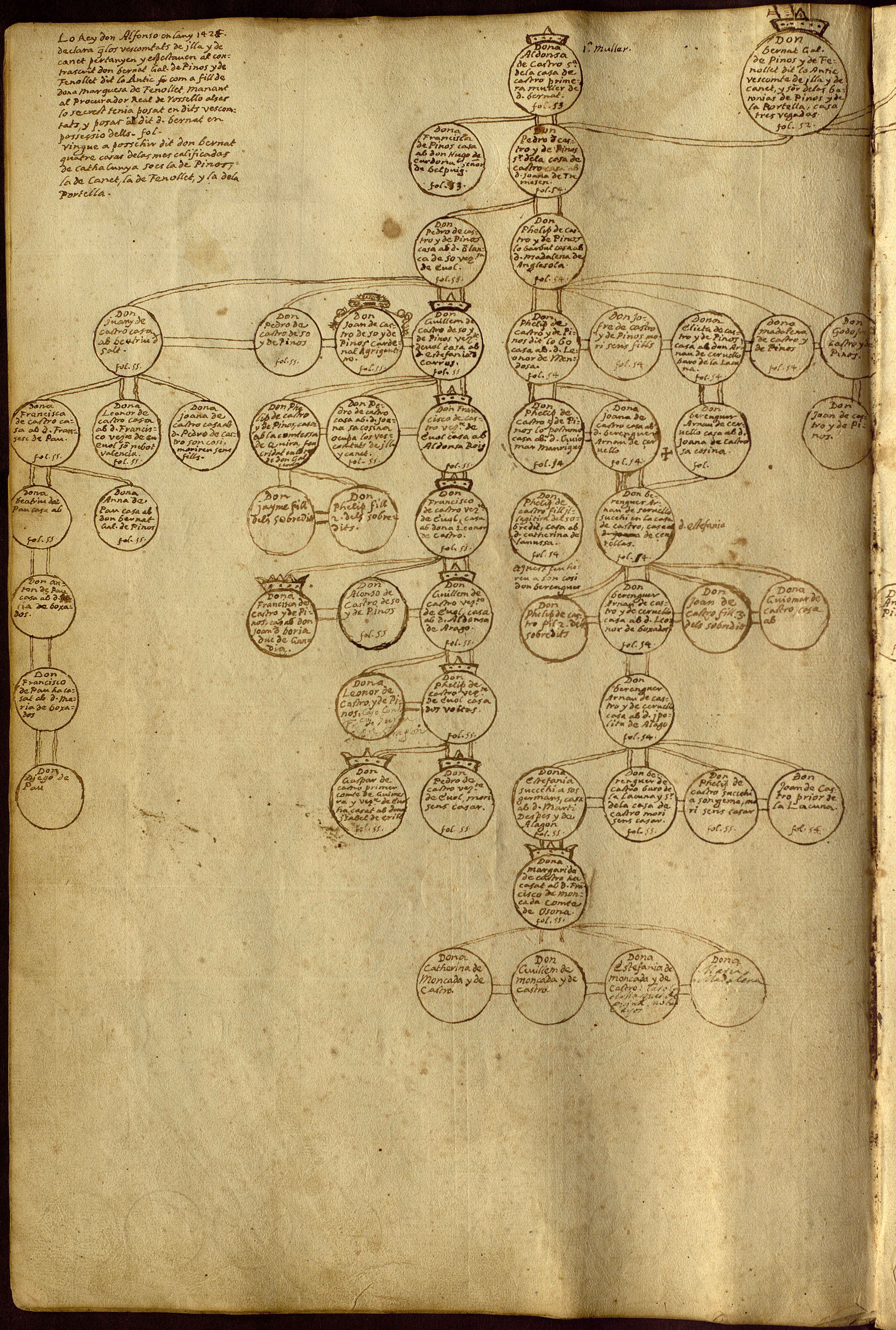 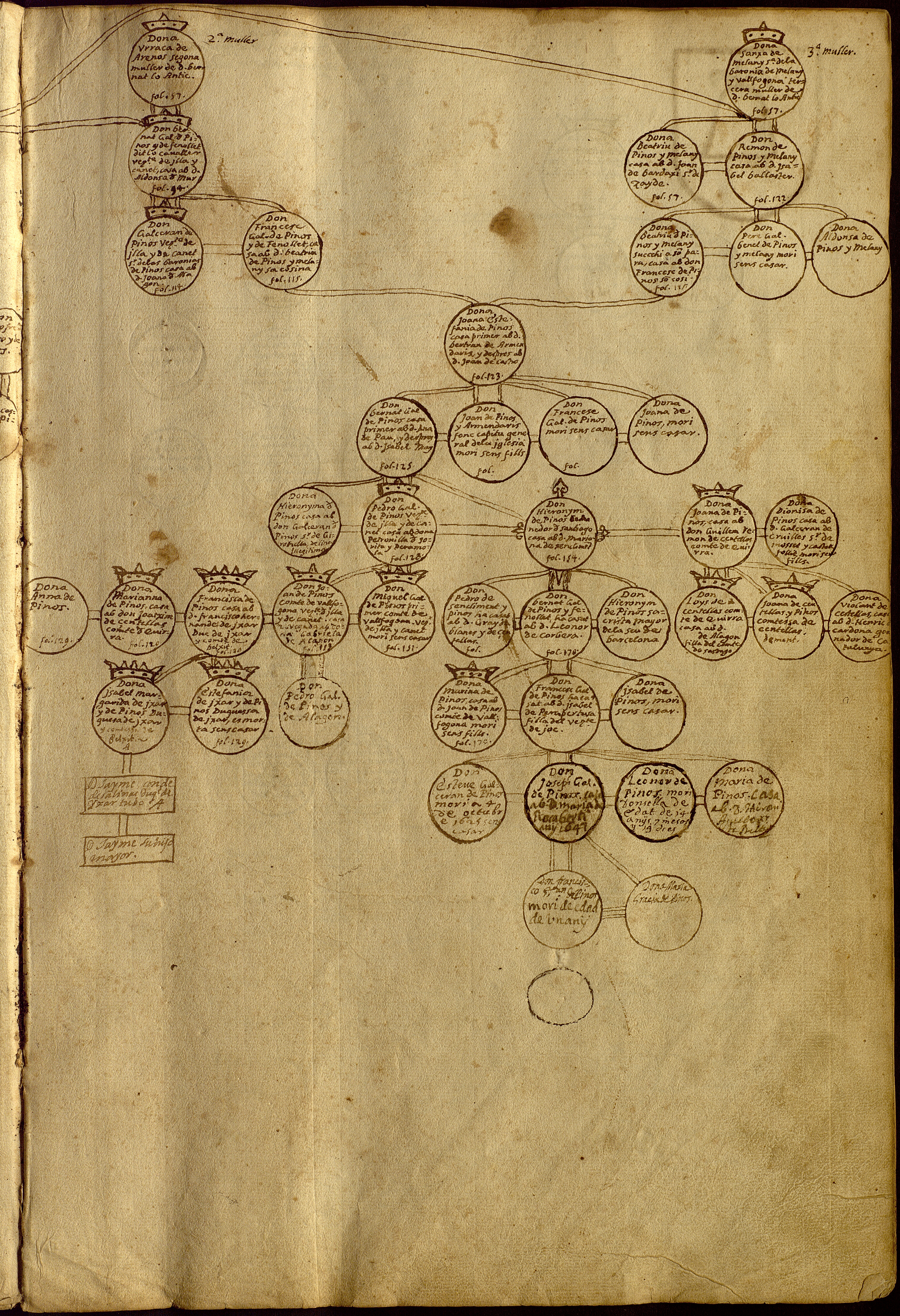 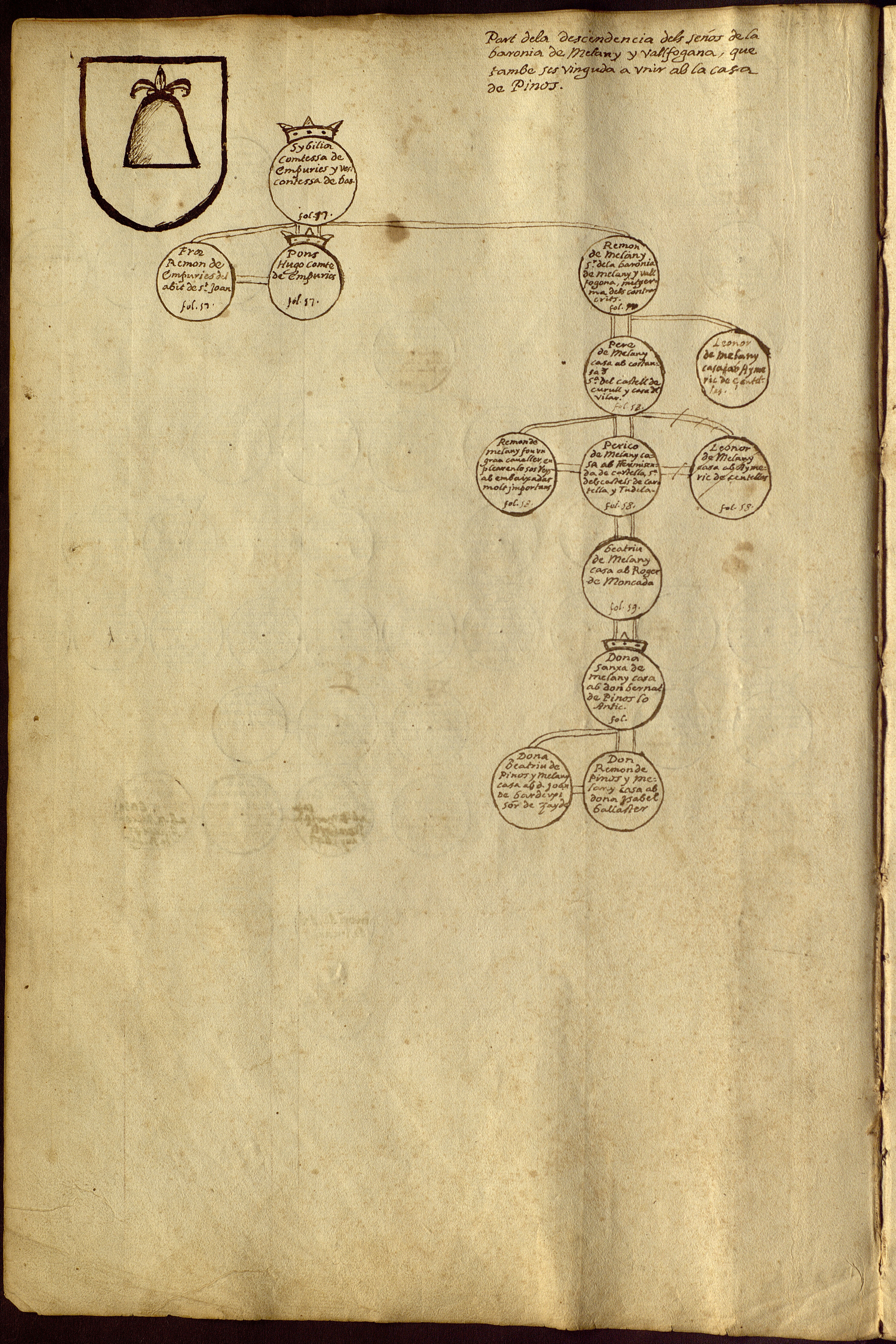 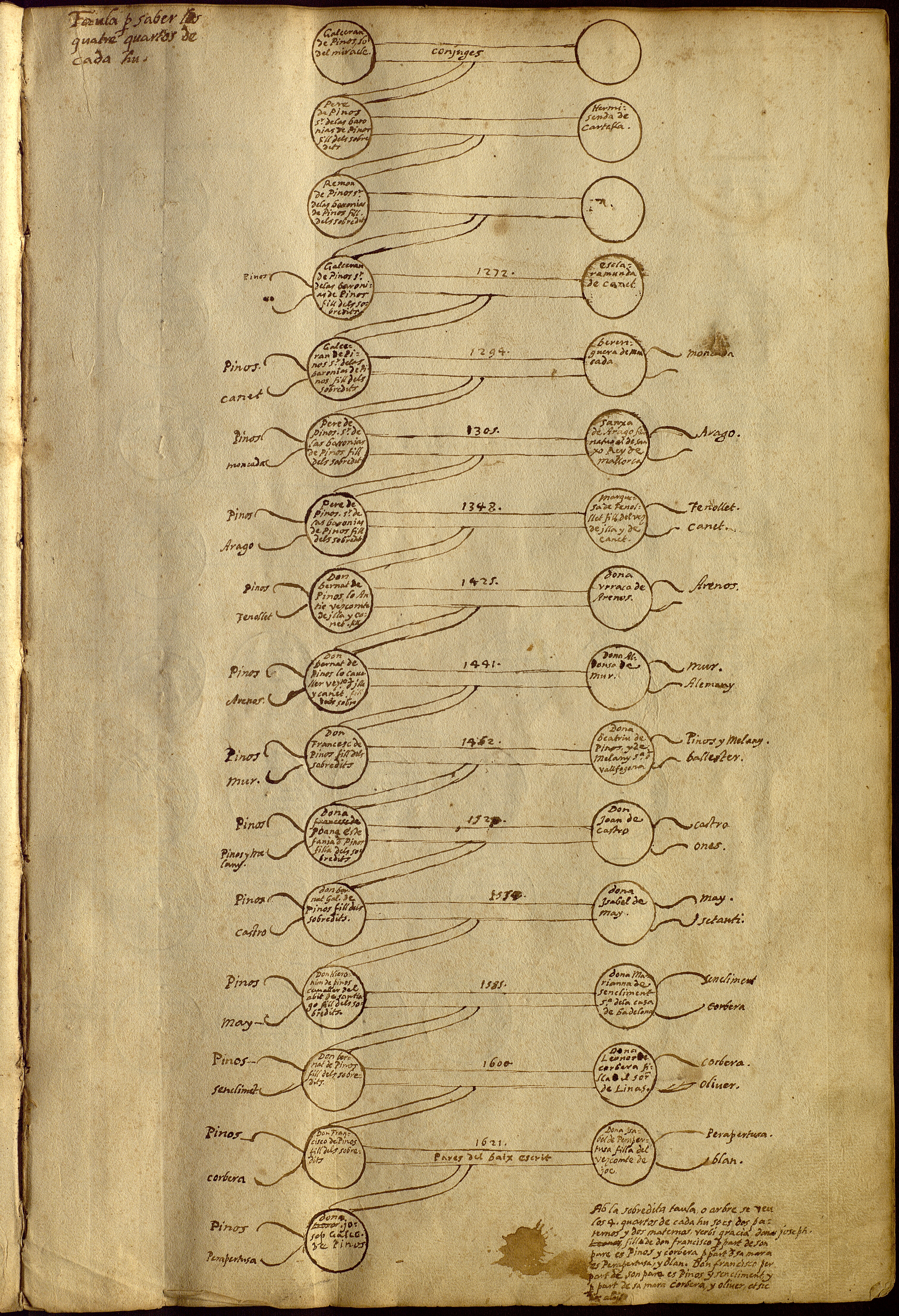 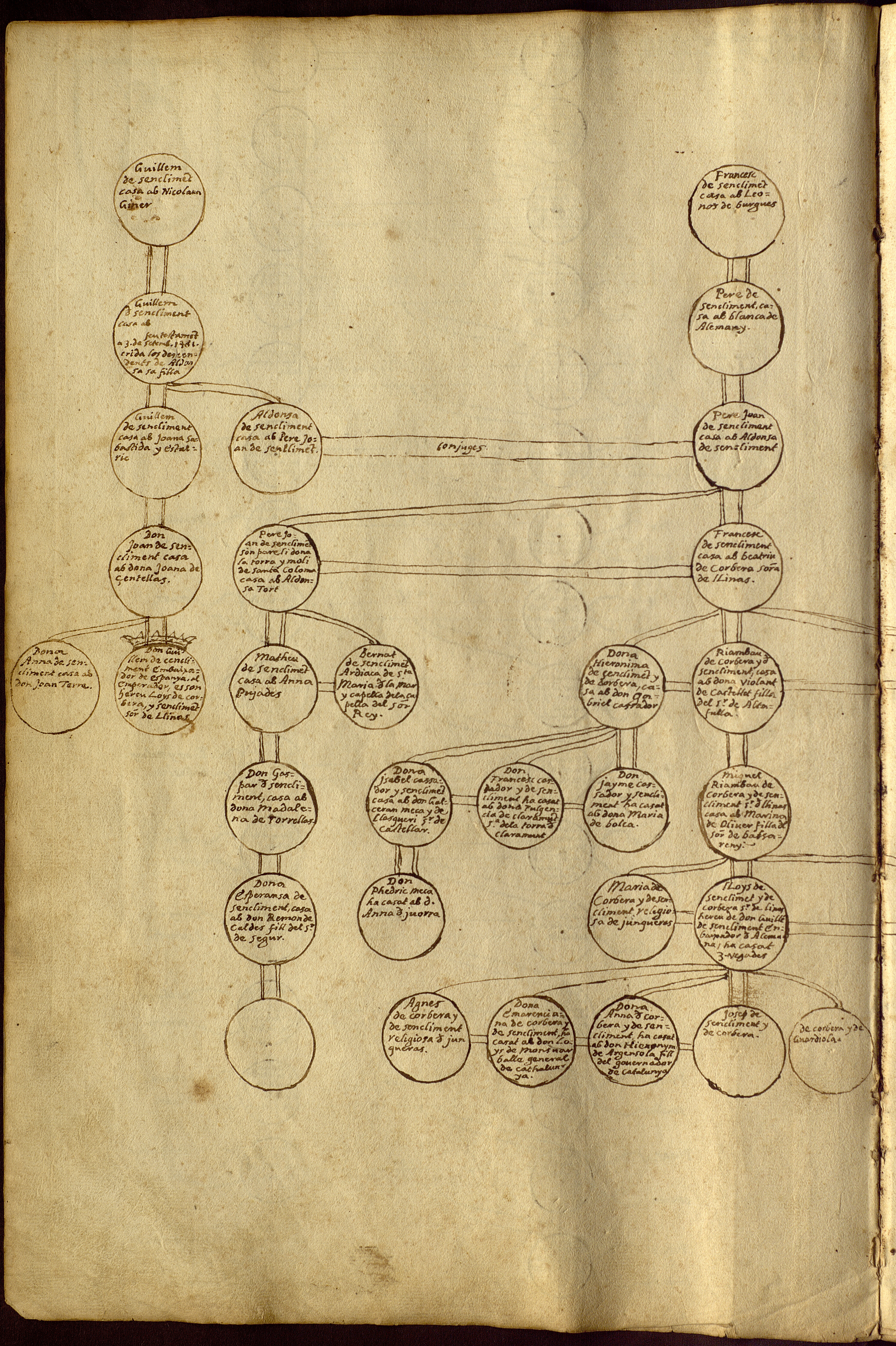 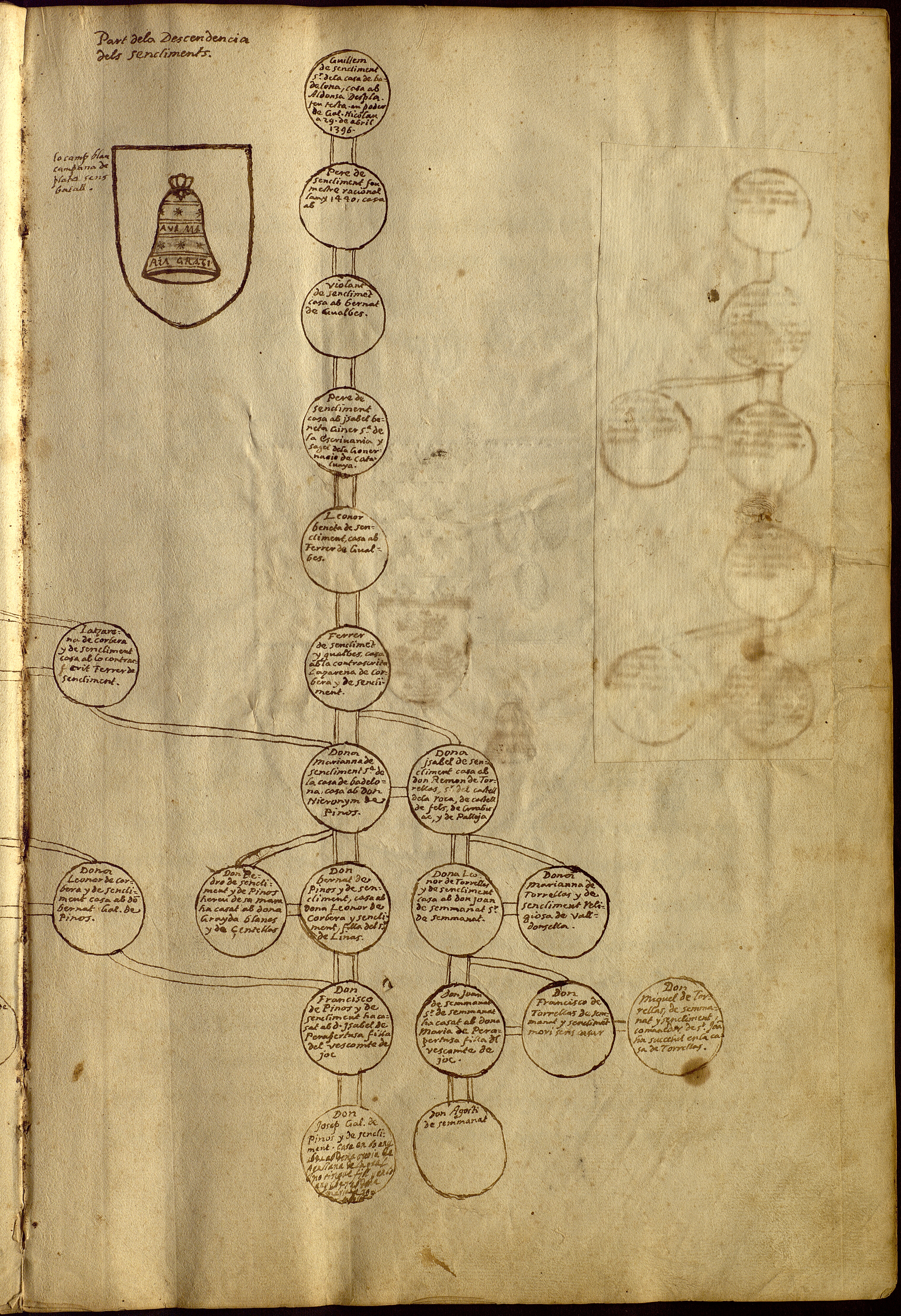 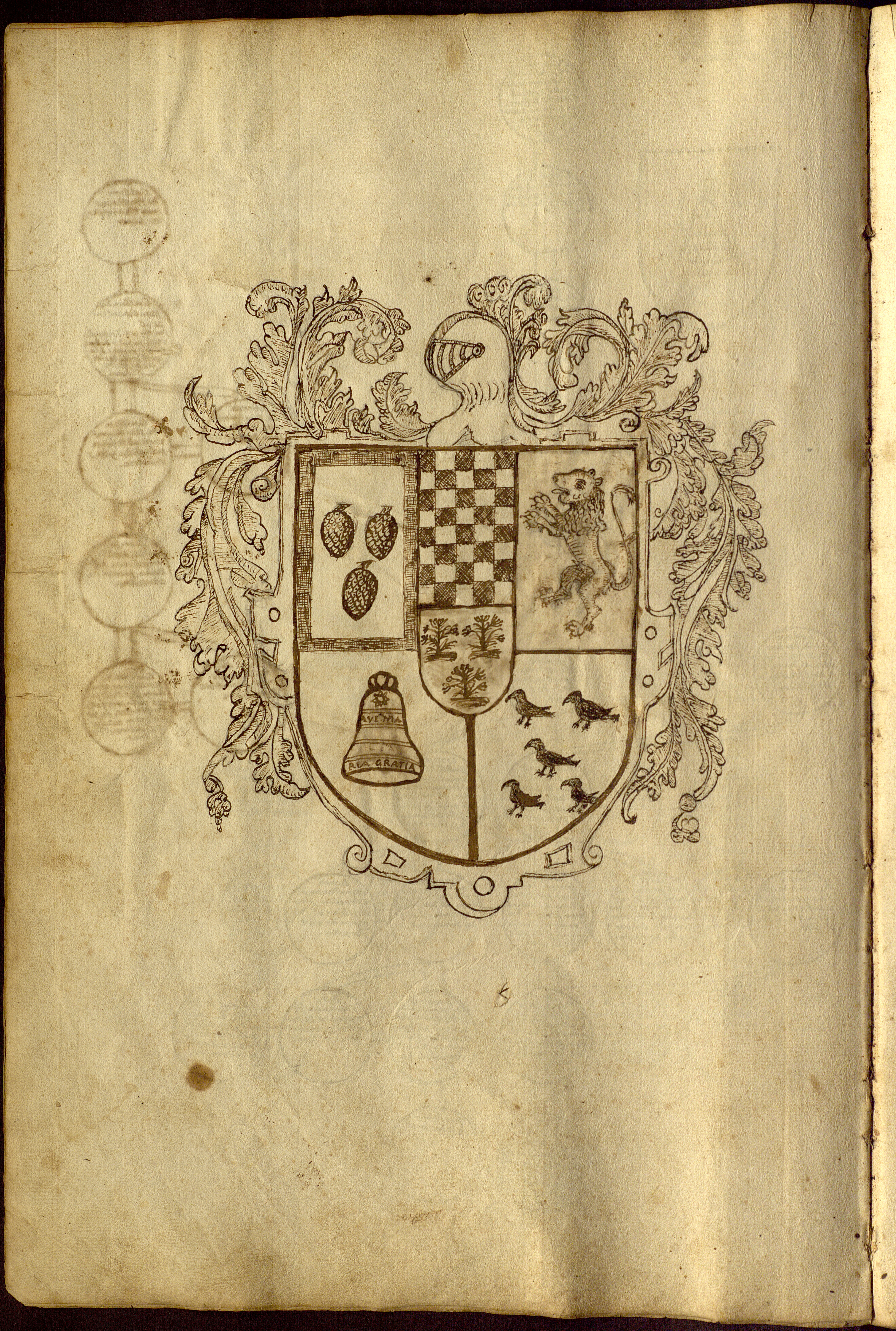